What is the value of this Japanese vase?

Question: Could you please provide me with the approximate value of this old Japanese vase? Thank you, Michael

RD Langer answers: Michael, this is 20th c Satsuma type, not worth more than $50.

Today's New York Times features a story on Nazi looted art, focusing on the refusal of several prominent American museums to fully cooperate with the growing number of claimant-heirs who are seeking restitution for Jewish-owned art stolen by the Nazis during the Third Reich.

R.D. Langer addressed this controversy over three months ago in his Looted Art online video. Stay tuned to our Antiquesmart Blog for the latest developments on this topic. 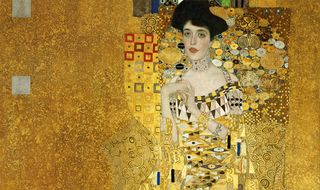 This Gustav Kilmt painting, entitled "Adele Bloch-Bauer I", was confiscated by the Nazis in 1938. In 2006, following a long legal battle with the Austrian government, the painting was finally returned to Maria Altman of Los Angeles, the original owner's niece. Other families have not been so fortunate.

Next time you are at a garage sale, keep your eye out for ancient Chinese objects of art. You never know....

This from the New York Post: A New York family scored a huge payday when this small bowl, which they bought at a garage sale for $3, turned out to be a 1,000-year old Chinese piece that sold for $2.2 million at Sotheby’s. The family bought the rare bowl at the secondhand sale in 2007, and kept it sitting on their mantle for years, the auction house said.

After becoming curious, the bargain hunters began consulting experts about the bowl. They finally brought the piece to Sotheby’s, which estimated it would sell for somewhere in the $200,000 to $300,000 range. But yesterday, London art dealer Giuseppe Eskenazi blew away those figures when he plunked down $2.2 million for the museum-quality piece.

AFP/Getty Images
The small Chinese pottery bowl that started as a $3 tag sale only to turn into a massive $2.2 million windfall at auction.He beat four other bidders for the Northern Song dynasty bowl — known as a Ding bowl — which dates back to the 10th or 11th century.There is only one other bowl like it in the world, and it is in the British Museum.A little less than 5 1/2 inches in diameter, the multimillion-dollar bowl could be mistaken for a decorative ashtray.Early-era Ding wares are known for their small utilitarian qualities, Sotheby’s said.Author Rose Kerr believes the ornamental Ding bowls were made to mimic the more elaborate gold and silver wares that were common in palaces.

The ancient piece is described as a Ding bowl because of the county Ding in the Hebei province where the kilns used to make the bowls were housed. The Ding bowl owned by the British Museum in London has been on display for more than 60 years, since it was bequeathed by famous collector Henry J. Oppenheim.

This isn’t the first big buy for Eskenazi. In 2005, the Turkish-born dealer paid $23.5 million for a rare blue-and-white jar from the 14th century at a Christie’s auction. Sotheby’s would not identify the lucky bowl sellers, only to say that they were a family from somewhere in New York state.

Earlier this month, a collection of abstract Impressionist art found in a Long Island garage was appraised at $30 million.

The owners of the bungalow found thousands of paintings and drawings by the Armenian-American artist Arthur Pinajian in 2007. They were later appraised by art historian Peter Hastings Falk and shown at the Antiquorum Gallery in Midtown.

Black Vase - Is It Chinese or Japanese?

Question: Hello I just came across your website as I was looking for information about a vase I have. Usually I am pretty good at finding information about objects on line. I can find no information about this vase online and I was wondering if you could help me. The vase stands about 5" and  the the lighter green decorations on the vase are indentations. It has two marks on the bottom. I am not sure if the marks are Chinese or Japanese. Thank you.

RD Langer Answwers: The vase appears to have a celadone underglaze which would make it Chinese.

What is the Worth of this Vase? 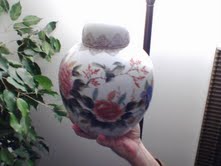 Question; What is is Chinese vase worth?

What are these Objects of Art Worth? 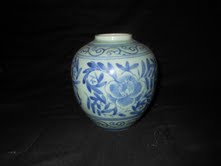 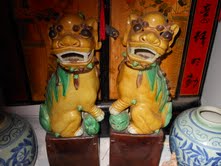 Question: I recently purchased these pieces at an antique store in Chinatown in San Francisco. I don't know if you can do both, so which ever you feel like appraising is fine. I will be very grateful.  The vases are 6 inches in height, and the foo dogs are 13.5 inches high.Thank you very much!

RD Langer replies: Ms. Lee, from the photos, both items look modern to me. They realy need to be examined, but they are possibly worth $100. each lot.

It is on the Norton Museum of Art. Enjoy.

Is this Vase Worth Anything? 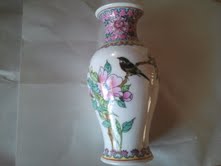 Question: is this Vase worth anything? Thank you.

RD Langer Answers: Senada, the mark appears to be of the Republic period.  (around 1940) I would estimate a value of around $150. However, I suggest you e-mail Dessa Goddard at Bonhams, and see if she has a different view. There isa mark on the outside of the bowl, with a Chinese poem, which may add some value. 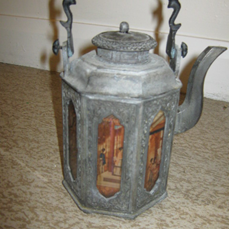 Question: Hi can you give me any info on my chinese pewter/metal tea pot???? It is decorative glass panels with figures. If a mark on the spout and the bottom of the vase. Do you know the marking might be??? The age and if its of any value. it’s 6.5 “ high.Thanks Sheila

RD Langer Answers: Sheila, I have seen these in Hong Kong along Hollywood Road. Value $125-150.