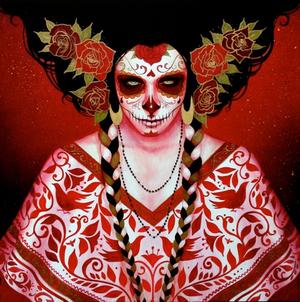 Sylvia Ji is a Los Angeles based artist whose work celebrates the female warrior. Sylvia Ji’s portraits depict fierce and feminine soldaderas, the spiritual sisters of women who assisted and fought alongside troops in the Mexican Revolution and were immortalized in folksong with the corrido “La Adelita.” Though not referencing soldiers, per se, Ji’s figures are warriors of sexual and moral ambiguity. With haunting and alluring beauty, they brim over melodramatically with a mix of sexual provocation and danger, as well as the threat of decay implicit in their skeletal markings. The artist has said that her paintings are symbolic reflections of herself or people she knows, but they are also totem images for a kind of universal revolutionary attitude of any age, gender, or cause.

What distinguishes Las Adelitas are the paintings’ uneasy admixture of the traditional and the contemporary. This ambiguous context for the images is echoed in the figures’ clothing and face markings, which are at once tattoo- and mask-like. The costumes—including ponchos and embroidered cloth—suggest the indigenous apparel of Michoacán, Puebla, and other areas of Mexico that is still popular in many adapted forms today. Ji’s paintings, like Red Quechquemitls and Red Serape, reference specific articles of clothing, but more importantly, evoke muertos of traditional Mexican culture.

Occurring annually at the beginning of November, Los Diás de los Muertos are feast days acknowledging the dearly departed through fiestas for the dead. Celebrated with personalized altars, or ofrendas, and held directly on graves in cemeteries, these special occasions are populated with colorful skulls and skeletons, dressed up and wearing hats. Though these “days of the dead” are considered happy occasions, Ji’s elegant muertos carry an edge of menace in their ambiguity. This is perhaps why muertos were an appealing symbol for artist and political satirist J. G. Posada and other Mexican Revolutionaries, as well as contemporary provocateurs like Ji.

Beautiful yet macabre! The colors are stunning.