Paul Thek occupied a place between high art and low art, between the epic and the everyday. During his brief life (1933-1988), he went against the grain of art world trends, humanizing the institutional spaces of art with the force of his humor, spirituality, and character. Twenty years after Thek's death from AIDS, we can now recognize his influence on contemporary artists ranging from Vito Acconci and Bruce Nauman to Matthew Barney, Mike Kelley, and Paul McCarthy, as well as Kai Althoff, Jonathan Meese, and Thomas Hirschhorn. This book brings together more than 300 of Thek's works—many of which are published here for the first time—to offer the most comprehensive display of his work yet seen. The book, which accompanies an exhibition at ZKM | Museum of Contemporary Art presenting Thek's work in dialogue with contemporary art by young artists, includes painting, sculpture, drawing, and installation work, as well as photographs documenting the room-size environments into which Thek incorporated elements from art, literature, theater, and religion.

Erial Ali is no ordinary artist. For his Celestial Soul Portraits, the California-based empath requests photographs of his subjects, collects as much biographical information as possible — especially pertaining to their spiritual beliefs — and channels their "unique Essence," based on his ability to "hear what's going on inside of people" and envision "a higher plane of existence."

Since the presumptive Republican presidential front-runners are intensely spiritual people, The Politics Blog at Esquire Magazine commissioned Ali to reveal their true inner selves to the world. He remains adamant that his portraits (made over the last six weeks in Photoshop) are meant neither to mock nor deify, but instead "help create higher potentials for the country and world."

"A warrior archetype, Huckabee fights for the environment. He is seen with a celestial scepter and greetings of goodwill for us all." 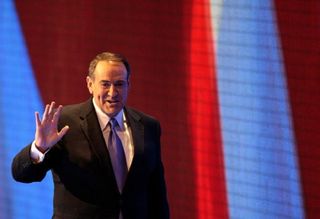 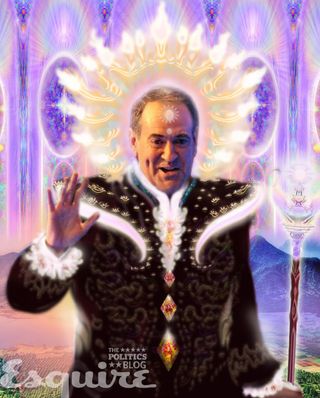 Photographic portraiture has been done and done again ... or has it? David Mead has turned portrait photography into a rich and interesting sub text into the world of facial hair. In fact, according to his bio, David focuses his camera on anything that is weird and unusual. 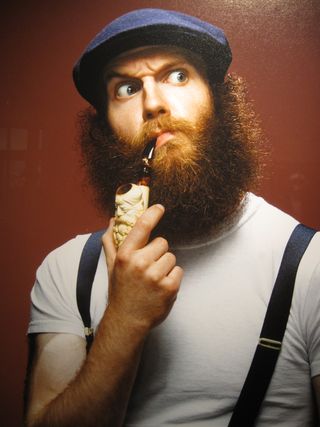 Mead is based in Austin Texas and has had a full career in advertising before he made the move into fine art. His recent portrait series of contestants in a moustache contest spans a range of reactions from riviting, magestic, statuesque, manly, strange, off-putting and even comedic.

If Mead's work inspires you to try something new from an established art form, try reading Sculpting with Light: Techniques for Portrait Photographers 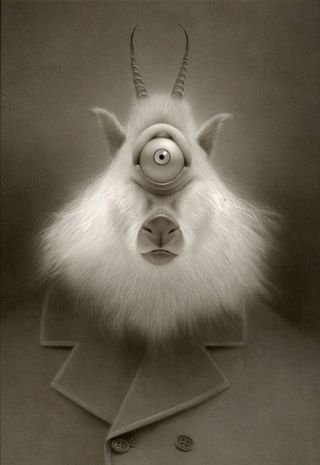 Travis Louie’s acrylic-on-panel paintings are whimsical portraits of bizarre beings, most of them inspired by a youthful fascination with “Atomic Age” sci-fi and horror movies, circus sideshows, and Vaudeville magic acts. Richly rendered in black and white with fine shading, the work is also influenced by the lighting and atmosphere of German Expressionist and Film Noir motion pictures.

Most recently, Louie has directed his lively journal practice of tiny drawings and narrative vignettes toward the creation of a cohesive, imaginary world styled with Victorian and Edwardian effects. This fictive zone is both cozy and creepy, inhabited by human oddities, mythical beings, and otherworldly characters that have seemingly posed for formal portraits to mark both their existence and place in society. Each image/character is uniquely loaded with ungainly charm and ample backstory. The underlying thread connecting the characters is the unusual circumstances that shape them and how they’ve lived.

For example, from his journal entries the artist sets the scene for The Myth of Floaters: “There are many misconceptions about floaters. A popular myth is that they levitate over people and sprinkle seeds that sprout into small herbs on the tops of heads with receding hairlines,” depicted vividly in the painting. As for Phineas G. Gruffin, a one-eyed goat in double-breasted coat, Louie writes, “He was first discovered on a foggy field in the Scottish countryside. He was disguised as a sheep herder singing awful songs to cover up the sound of his shoveling for ‘skumpers,’ furry underground dwellers who are part potato and part vole.”

Elsewhere, “a large Krampus has turned himself in for child-juggling” in Krampus Mugshot, offering frontal and profile views of the goofy beast with fanged underbite. In other works, a man is cursed by a goat, an engine driver can’t stop vibrating in his sleep, and another figure overcomes his phobia of spiders… all told with Louie’s knack for evoking narrative through the visual. To achieve the dramatic mood in his paintings, Louie works in a strict palette of black and white or limited color on plate-finish illustration board or finely sanded and primed wood panels.