The Bunny in the Moon, refers to an Asian legend with Buddhist origins of a rabbit which sacrifices its life to feed a starving man. The man is a deity in disguise and honors the animal by sending its ashes to the moon for all to see its image and remember its selfless act. McPherson believes the ultimate sacrifice of life and death can be equated to love and loss. In the painting, a moonlit nude couple hold arrows over white pieces of paper pinned above each other’s hearts—either about to pierce flesh or write a love note. The paper refers to target markers used during prison executions in Ireland, reinforcing the concept of self-surrender in the name of love.

Another painting references an ancient Roman version of the biblical story of Adam & Eve, in which the first elephants eat mandrake root, become aroused, mate, and give birth to offspring in the safety of water. Other myths which influenced works in the show include Brazilian river dolphins who shape-shift into men and seduce women during festivals, a Japanese ghost bride who steals the souls of her lovers, and the classic Greek legend of Narcissus.

ABOUT THE ARTIST
Born in San Francisco in 1976, and raised in Los Angeles, Tara McPherson is a painter, poster artist and freelance illustrator currently based in New York. In 2001, she received her BFA from Art Center College of Design in Pasadena, CA with honors in Illustration and a minor in Fine Art. McPherson’s artwork has been exhibited around the world, featured in numerous magazines and publications. An image of her Searching For Penguins painting was published in a New York Times article about Jonathan LeVine Gallery in March of 2010. As an illustrator, McPherson has created comic art, covers, advertising and editorial illustrations for DC Comics, Dark Horse Comics, Warner Brothers, HarperCollins, Bloomsbury, Kidrobot, Punk Planet, Dogfish Head Brewery, and Nike among others. She’s produced numerous gig posters for musical artists and rock bands such as Beck, Modest Mouse, Mastodon, Death Cab for Cutie and many more. Todd Selby is a portrait, interiors, and fashion photographer and illustrator. His project The Selby offers an insider’s view of creative individuals in their personal spaces with an artist's eye for detail. The Selby began in June 2008 as a website, www.theselby.com, where Todd posted photo shoots he did of his friends in their homes. Requests quickly began coming in daily from viewers all over the world who wanted their homes to be featured on the site. The Selby’s website became so popular—with up to 35,000 unique visitors daily—that within months, top companies from around the world began asking to collaborate.

These joint projects have included a large ad campaign and web project with Nike 6.0, a solo show at colette, an international ad campaign for Habitat, work for the New York Times T Magazine, and frequent contributions to Vogue Paris and Architectural Digest France. Todd’s first book, The Selby Is in Your Place

has been released recently by Abrams.

Before working on this project full time Todd worked as a translator and Tijuana tour guide to the International Brotherhood of Machinists, a researcher into the California strawberry industry, a Costa Rican cartographer, a consultant on political corruption to a Mexican Senator, an art director at a venture capital firm, an exotic flower wholesaler, a Japanese clothing designer, and a vermicomposting entrepreneur. Todd currently lives in New York City. His pastimes include eating four square meals a day, planning vacations, breaking his computers, and working on his 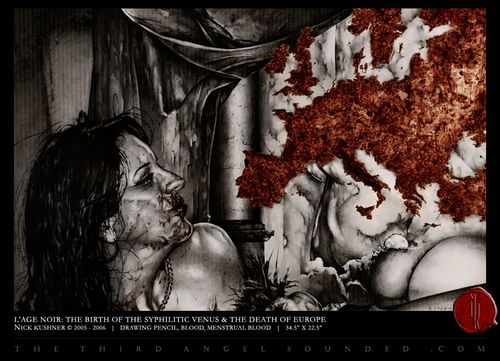 They say that art is very personal to the artist but there is nothing quite as personal as Nick Kushner's creation of his art. Kushner has garnered attention from the alternative art press in America and abroad for using a most personal pigment: his own blood.

Nick Kushner taps into the darker recesses of the human psyche with esoterically surreal imagery that is driven not only by his knowledge of the occult, but by life experience as well. Kushner liken his work to "Art as modern-day alchemy by the literal and complete immersion within it, unleashing the schism of transformation and inflicting the vision of the innermost catharsis upon the world through its creation. Works meticulously detailed in esoteric imagery, and painted in blood, the most personal and symbolic medium intrinsically possible."

In addition to his art, Kushner is a lifelong pursuant of the occult and authors the site Nachtkabarett.com which is an analysis and dissection of the occult imagery within the art of Marilyn Manson. Kushner's art has been featured in several print and online publications such as Bizarre Magazine, Synergy (Australia), International Lexikon Surreal : Encyclopedia of Surrealist Artists hardbound compendium, the internationally distributed art and occult publication Silk Milk, and has been featured on the A&E television network during an on-camera interview in the Marilyn Manson edition of the Biography series. Kushner is also a member of the Society for Art of Imagination. Like a modern-day Goya, Gottfried Helnwein’s art addresses themes of inhumanity, violence and the virtue of personal expression. Over more than four decades, the artist has pursued a singular, radical vision realized in monumental paintings and photographs. With stark and probing psychological intensity, he critiques not only the past, but present-day veneers, jolting us from the comfort of complacency. Such confrontations are informed by his upbringing in post-war Vienna, Austria—an experience that fueled the artist’s passion for truth and tolerance. Today, Helnwein immerses himself in our ever-changing cultural landscape, working from his studio in Los Angeles