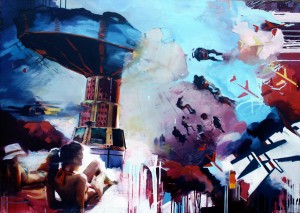 Born 1980, Chloe Early grew up in Cork, Ireland. Since graduating from NCAD Dublin in 2003 she has pursued her painting practice and exhibited in Cork, Dublin, London and Los Angeles. In 2004 Early moved to London which is where she now lives and works.

Chloe Early's current works are oil paintings on linen and aluminum. Large scale painterly montages, she works with an abstracted urban landscape background placing interchangeable motifs: divers, balloons, stars, herds of animals, always hinting at the opposing themes of apocalypse and redemption. Urban scenes form the backbone of the paintings which aim to transgress states of dream and reality bringing together an improbable selection of images; the lushness of a garden of Eden is contrasted with the grit of a post industrial building boom. These landscapes are populated with figures which have an air of oblivion, they are lost in a dream of perfection and oblivious to their surroundings. Despite the urban subjects the paintings always retain a dream like quality, a soft focus. Early aim's to layer motifs and meanings, using imagery from a range of sources, her own photographs, magazines, books, the internet and travel adds to create paintings whose meaning shift and blur like a troubled dream. 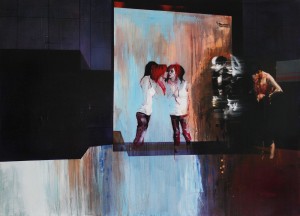 Working in mixed media on canvas, Ian Francis combines abstraction, figuration, and elements of both painting and drawing to create distinctly contemporary works. He draws his inspiration from cinema, pornography, street culture, and images sampled at random from the Internet, synthesizing these sources into a quasi-literal vision of the “mediated landscape.” Amid high-color washes and jagged brushwork, Francis depicts semi-clad figures who loll and mix in casual groupings—some scenes are intimate, others hedonistic. These figures are recognizable, the young and beautiful denizens of a particular media fantasy fueled by sex, death, and celebrity. Abstraction and figuration mutually support the artist’s suggestion of a worldview where violence and style intersect.

Born in 1979 in Bristol, England, where he continues to live and work, Francis received a BA in art and illustration in 2001 from University of the West of England. Solo exhibitions of his work include Exodus, Lazarides Gallery, London (2010); New Works, MTV Gallery, Sydney, Australia (2009); Together Forever, Kinsey/DesForges, Los Angeles (2008); and Super Coma Fantasy, BLK/MRKT Gallery, Los Angeles (2007). His work has also been featured in the group exhibitions The Outsiders, Lazarides Gallery, London and New York (2008); and Free Parking, OKOK Gallery, Seattle (2007).

Adam Alaniz reminds me of a benign Richard Dadd - the victorian painter whose mythical misenscenes gave the viewer the feeling of another world. Alaniz' work is cuddly yet still other worldly.

As it was written,  Adam Alaniz can make pretty much anything look warm and inviting. The depths of the ocean, the mysterious rainforests–even germs! He draws much of his inspiration from landscapes, fables, science, and nature. For some reason, his paintings, especially Someone Is Calling, reminds one of a cuter version of FernGully: The Last Rainforest, a favorite childhood movie.

His gentle creatures and magical settings have been exhibited at Gallery 1988, Santa Monica Art Studios, Gallery Nucleus, and La Luz de Jesus. In addition, The Society of Illustrators of Los Angeles presented Adam with the Children’s Market Gold Award for Germ Parade

Who hasn't been fascinated by the art of Salvador Dali. Dali was an enigmatic figure who figured prominantly in the Surrealist movement of the 1930s. But his very quirky personality soon transferred him into less of a fine artist in the original sense and more of a performance artist - one who transcended painting to become a filmmaker, jewelry designer, author and costumer.

Salvador Felipe Jacinto Dali i Domenech, was born on May 11, 1904, in Figueres, Spain. He attended the San Fernando Academy of Fine Arts in Madrid and led to his  first one-man show, held in Barcelona in 1925. He recieved international fame when three of his paintings were shown in the third annual Carnegie International Exhibition in Pittsburgh in 1928.

After this, Dali went to Paris, and joined the Paris Surrealist Group. It was in this same year that Dali met Gala Eluard when she visited him in Cadaques with her husband, the French poet Paul Eluard. She became Dali's lover, muse, business manager, and the source of inspiration for many of Dali's greatest works. They were married in 1934 at a civil ceremony and made their first trip to America. Dali emerged as a leader of the Surrealist movement and his painting, Persistence of Memory (1931) is still one of the best known surrealist works.

But, as war approached, the apolitical Dali clashed with the Surrealists and he was expelled during a trial conducted by the group in 1934. Although he did exhibit works in international surrealist exhibitions throughout the decade, asserting that: "le Surrealisme c'est moi" by 1940 he was ready to move into a new era, one that he termed "classic."

During World War II Dali and his wife, Gala, took refuge in the United States, returning after the war's end to Spain. His international reputation continued to grow, based as much on his flamboyance and flair for publicity as on his prodigious output of paintings, graphic works, and book illustrations; and designs for jewellrey, textiles, clothing, costumes, shop interiors, and stage sets. His writings include poetry, fiction, and a controversial autobiography, `The Secret Life of Salvador Dali'. He also produced two films - `An Andalusian Dog'(1928) and `The Golden Age'(1930) - in collaboration with Bunuel.