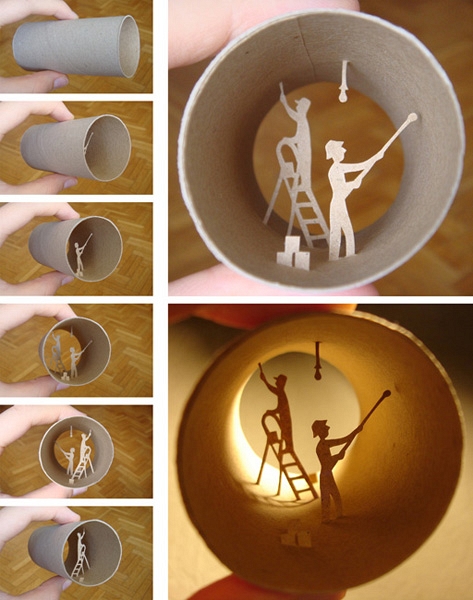 Anastasia Elias is an artist whose medium might be considered a bit unusual. “I cut the small paper shapes that I stick inside the toilet paper rolls. I use tweezers to manipulate the paper shapes. I select the paper of the same color as the roll. It gives the illusion that the paper figures make part of the roll. I need few hours to make one piece.”

Anastasia Elias, just like Andrea Dezso with her tunnel books, uses paper in three dimensional stage-like misenscenes. Elias' work is unusual in that it creates silhouettes that change with the use of light. 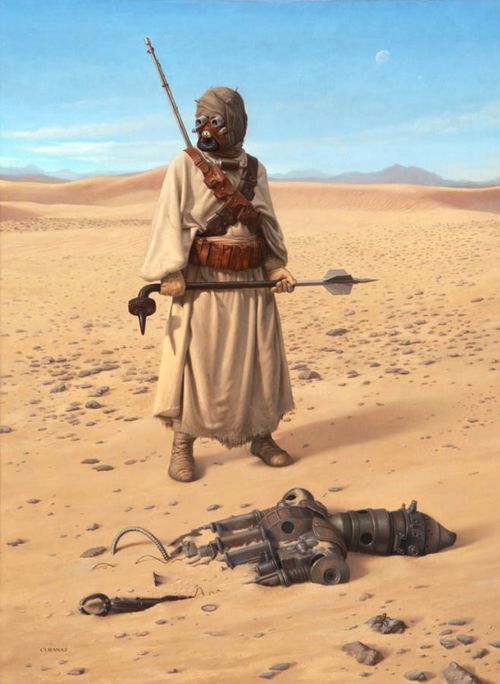 Tony Curanaj was recently selected by George Lucas to be included in Star Wars Art: Visions

a book featuring newly created works based on the theme of Star Wars.

Curanaj's contribution, "A Good Find: Portrait of a Tusken Raider" was included in this review by Wired

Here is what Curanaj had to say about his painting:
"The inspiration behind 'A Good Find: Portrait of a Tusken Raider' is in what the sand people of Tatooine must do to survive the harsh and desolate desert climate," says New York painter Tony Curanaj. "Stylistically, I looked toward the 19th-century Orientalist painters for their meticulous and beautifully designed images of life in the desert. I was able to find a great Tusken raider costume and model robot, which enabled me to paint from life as well as from imagination."

Tim Harriss is a master of pop culture painting with a twist. His whimsical interpretations of Old Master paintings launched his career and led him into more of the pulp novel and dime store dramatics genre. The result is work that is accessible, humorous and well painted but also with an edge which makes it sophisticated and interesting. Familiar on the one hand yet curiosuly engaging and unusual on the other.

He is a painter who creates imagery that freely references from a number of sources, such as Renaissance art, pulp fiction cover illustrations, and contemporary pop culture stylings. From all of this, Harriss creates imagery that is often squarely in line with the tradition of The Grotesque. His subjects are typically portraits. Sometimes these are clearly of actual people, and at other times seem to be more allegorical, but in a cryptic and personal way that lends itself less to a direct translation.

Although Harriss himself isn't likely to bring it up, painting is actually the second phase of his creative career. In the earlier part, Tim was focused on being a musician, playing guitar in punk bands, most notably the band Kepone. Although at first this seems like just something trivial that gives Harriss a cultural identity (but again, you will have to press him hard before he tells you about his collaborations with Jello Biafra, H.R., and Eekamouse), but it bears mentioning for another reason: There is a common conception that punk rock music eschews technical ability as something that limits raw creativity. However, as a punk musician in what I will refer to as the "Post Band Brains" latter-day punk scene, Harriss was one of many musicians who valued technical skill as a tool of creativity. To Tim Harriss, the essence of punk music was expression, and rather than denounce the popular music that came before, it all became fair game to be mixed into his own musical landscape.

As a painter, Harriss employs the same creative method. Not one to be tied to any single art movement, Harriss looks at other painting as something to be learned from, and then mixed into his own compositions, but in his own way. And, as with his music, Tim employs impeccable technique to blend styles and imagery that spans over centuries of painterly tradition into his own artistic vision. 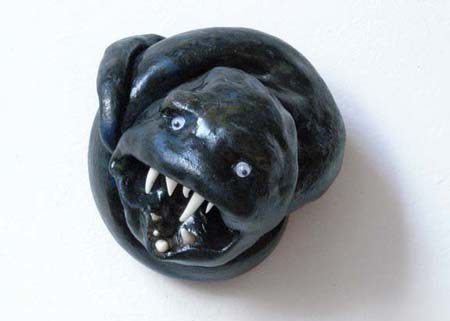 Mary Carlson is a multi-talented artist who works in many media - painting, photography and even fabric and yarn. But I particularly enjoy her series of ceramics titled Demons, Figures and Heads. These little monsters have a sense of humor as well as horror with gaping mouths, brilliant colors and fluid forms. Carlson's agility in the clay is evident and her unique perspective on the form is entrancing.

Born in Wisconsin and working in New York City, Carlson has had an illustrious career which includes a 2007 New York Foundation for the Arts Grant, a 1993 John Simon Guggenheim Fellowship (sculpture) and a 1988 National Endowment for the Arts (sculpture). 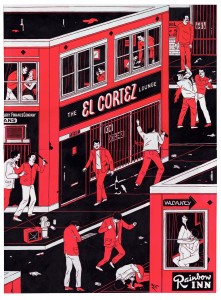 In Cleon Peterson’s anxiety-riddled world, violence is the status quo. His dystopian scenes evoke Thomas Hobbes’ description of life as war between individuals: “solitary, poor, nasty, brutish, and short.” Many of Peterson’s paintings feature images of hostility removed from any scenery that might bring reason to bear a sense of justness to the brutality; the only context given is the mélange of evisceration coating the floor. In other works, the setting is a cityscape where storefronts only serve to indulge the base narcissism and vice taking place on the streets.

Where one might sense that Peterson’s characters occupy a lawless world, there is rather a significant presence of authorities, albeit wantonly corrupt and perhaps more savage than the civilian population. And while the official’s uniform connotes his mandate for dominance, the real power is vested in an erratic sea of like-minded miscreants that forces outsiders to bend to its will. Deviance is simply the norm, and the displaced individual is forced to navigate this wicked world alone, finding hollow bits of pleasure and meaning in violence, sex, religion and drugs.

Peterson describes his bedlam as “a gray world where law breakers and law enforcers are one in the same; a world where ethics have been abandoned in favor of personal entitlement.”