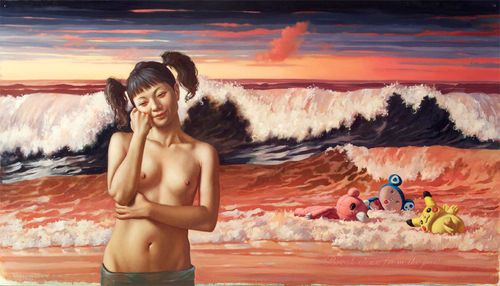 He explains his work as follows:

Ever since I can remember I have created my own world through drawing and painting. As a child it was a way I could leave the real world for a little while and have some control over the feelings I experienced. Today I still create worlds with my art, but now they reveal the many contradictory aspects of my hidden self.

The technical qualities of my work are an anachronism in the 21st Century. In a world that becomes increasingly digitized, I realize how important the act of painting is for me. I am inspired by the physical qualities of the paint, by the surfaces of copper and wood panel, and by the magic of seeing the painting develop over weeks and months.

The focus of my paintings often shifts with the changes in my life. The process is the art. At times my work has been classical, claustrophobic, fetishistic, beautiful, vulgar, architectural, humorous, morbid, decorative, and sexual. Sometimes it is all of these at once.

Painting for me is a devotional profession. At the best of moments I paint in an enlightened state. This is how I felt as a child.

This video was taken at one of his many openings in NYC:

Born in Santa Monica, California, and raised in Greenwich Village in New York City where he still resides, Wellington received his BFA from the Rhode Island School of Design and his MFA at The New York Academy of Art. His paintings have been in exhibitions in New York, Los Angeles, San Francisco, Miami, and Paris. He has also shown at the Centre Georges Pompidou in Paris and The Arnot Museum in New York.

Alyssha Eve Csuk is a photographer who has an unusual muse - it is the Bethlehem Steel Factory. ﻿ 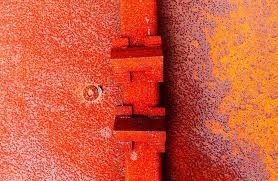 Once, Bethlehem Steel was a mighty industrial force, churning out metal for skyscrapers, bridges and warships. But its plant in Bethlehem, Pa., closed for good in 1995, and the company was sold in 2003, a victim of changing economic realities. “I find that the erosive effects of the elements have transformed the facades of the mill into textural canvases,” says Alyssha Eve Csük, a photographer and resident of Bethlehem. She has turned images of disused pipes, furnaces and engines into art in a collection called “Abstract Portraits of Steel.”

Here work has a certain stoicism and grace, lyrical yet also moody and dark. Like artist Charlene Weisler who uses urban detritis and erosion in her photography, Csuk uses industrialized erosion and decay to create an otherworldy atmosphere that is errily beautiful. 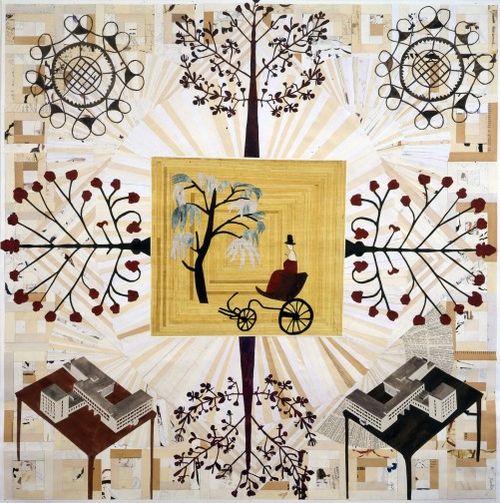 Enthusiastically bizarre, Jockum Nordström has emerged as the latest in a long line of deadpan Absurdists, here marrying Dadaist peculiarities with northern European folk art. In intricately worked pencil drawings and rough-hewn, child-like collages Nordström reiterates his favourite subjects: guitars and pianos, horses and owls, three-masted tall ships, top-hatted characters from 17th-century morality tales. Lumpen bodies with oversized heads stare tranquilly as bits of naked bodies peek out of a closet; a woman smiles with comic blankness, although her eyes are half-way down her face. Sex is everywhere – gleefully, weirdly and variously depicted in a facile but charming contrast to the works’ old-fashioned aesthetic.

Best-known for his collages, the Swedish artist draws sympathetic figures, props and background decorations for his scenes, then cuts them out and shifts them from piece to piece. He creates several at a time, and weaves the clippings, rag-rug-style, into the background of later works. Even taken individually, his pieces thus intimate their participation in a larger oeuvre – one that, if you had the chance to see it, might explain the strange couplings and goings-on in these tableaux.

Like a number of artists working in illustrative media – Neo Rauch or Amy Cutler, for example – Nordström balances representational elements with a barrage of disjunctions: doses of Surrealism, logical incongruities, rifts between form and content, unexplored allusions.

David Platt is an emerging New York artist with a singular vision and a matching style of painting.

In 2006, he cultivated a palette of contrasts, and developed the staccato line technique that would eventually become his signature. In his current work, David attempts to reconcile opposites. His work depicts a psychological landscape where inner and outer space converge; where construction and destruction are indistinguishable; where microorganisms fuse to become macro-organisms ad infinitum. Out of the abstract soup emerges corporeality, whose forms and contours are undifferentiated, existing for a timeless instant before death and reintegration. 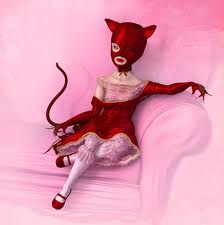 There is something about Toronto-based artist Ray Caesar and his charming yet eery prints. Caesar has a painterly approach, rendering imagery with soft edges and movement. The artist’s digitally created dreamscapes, set in elaborately furnished Rococo-style interiors, feature haunting doll-like female figures with delicate features and porcelain complexions. The hybrid characters, part-child-part-woman, some sprouting tails, tentacles and other animal appendages, all wear elaborate costumes that reference fashions of the past and often incorporate futuristic elements as well.

Caesar works in Maya (a 3D modeling software used for digital animation effects in film and game industries), using it to create his figures as well as the virtual realms in which they exist. Through the program, he builds digital models with invisible skeletons and anatomical joints that can be bent and manipulated to assume any pose. He wraps the models in rich textures, adding hair, skin, eyelashes and fingernails. Then places them in digitally lit, impeccably detailed 3D environments built with architectural layers, windows, wallpapers, curtains and furnishings. Caesar’s meticulous process incorporates elements of drawing, painting, collage and sculpture, working countless hours to achieve every remarkably intricate tableau. Further emphasizing his sculptural technique, Caesar compares his process of 2D printmaking with imagery created in 3D as being similar to the practice of capturing stills from video and film.

With full control over dressing, posing and lighting his figures as well as every element of their surroundings, Caesar’s craft is an advanced extension of a childhood obsession—playing with dolls. Fantasy, escapism, human cruelty and disguise are reoccurring themes explored within his dramatic narratives. Betraying the seemingly child-like innocence of the figures is their piercing, knowing gaze—exposing inner strength in contrast with their fragile physical appearance. Dark details manifest from deep within the artist’s vast imagination to define simulated realities, transporting the viewer into sanctuaries created for his lost ghost-children who emerge from shadows into safe refuge, carrying macabre secrets and hidden truths.

ABOUT THE ARTIST
Ray Caesar was born in 1958 in London. At an early age, his family moved to Toronto, Canada, where he currently resides. From 1977—80 he attended Ontario College of Art, followed by 17 years from 1980—96 working in the art & photography department of the Hospital For Sick Children in Toronto, documenting disturbing cases of child abuse, surgical reconstruction, psychology, and animal research. Coupled with inspiration from surrealists Kahlo and Dali, Caesar’s experiences at the hospital continue to influence his artwork. His haunting imagery is created digitally using 3D modeling software called Maya, mastered while working in digital animation for television and film industries from 1998—2001. In 1999, Caesar received a Primetime Emmy Nomination for Outstanding Special Effects in a series. Born in Cheyenne Wyoming, Matt Straub spent his early years hitchhiking and hopping freight trains across the Western states. Straub reveals his deep nostalgia for the harsh landscapes of the American West in his latest body of work, Iʼm Hit. But I Can Make It.

With a bold comic visual vocabulary and sensibility, Straubʼs paintings echo the period of transition between Abstract Expressionism and Pop Art. Featuring classic Western iconographic images of cowboys, cowgirls, guns and horses, Straubʼs paintings and collages depict the humorous and violent narratives and sentimental mythologies of the American West - a landscape defined by melancholy sunsets, badlands, gunfights, outlaws and red-blooded heroes. His references include Hollywood Westerns and the Comics and Pulps of the 1940ʼs-50ʼs.

Straubʼs work also looks under the hood of the present day reality of the American West, with its concrete plains and Mini-Mart cowboys- places where the buffalo used to roam. Straub tackles the highs and lows of society with a comic visual vocabulary and a bold, fresh Pop Art sensibility. His Pop-Westerns are like graffiti splattered box cars rolling across the plains, their nostalgia a metaphor for a vanishing West.

Matt Straub has lived in Chicago, London, and Berlin. He graduated with a BFA from the University of Illinois in 1979. He currently resides in New York City.