WANG QINGSONG is a photographer whose work is at once starkly attractive and darkly humorous. Staged and absurd, their presense fills a wide expanse while focusing on the sad and hollow promises of consumer culture in China.

In Bathhouse (pictured here), for example, the artist sits in a pool surrounded by plastic fruit, Coca-Cola bottles and painted ladies, all of whom look terribly bored. Later works are both grander and more subtle, such as “Yaochi Fiesta” (2005), a mythical scene of paradise in which scores of nude Chinese look uneasy, even ashamed. With legs crossed and mouths pursed, they appear chagrined by what was meant to be a delicious fantasy.

Mr Wang, a Beijing-based artist, arranges these scenes in a warehouse-like film studio. Though often amusing, they are more than mere gags. Rather, they often feel like odd group portraits, with plenty of powerful reasons to keep looking beyond the first snigger. 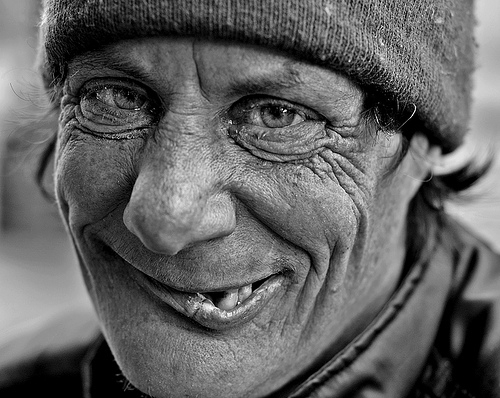 Tom Stone was born on a train outside of Mexico City traveling to Puerto Angel, Oaxaca. His parents separated soon after his birth.  He spent his early childhood with his mother communally in Los Angeles' famed Source Family; and after its dispersion, in various nomadic settings in Hawaii and California.

A graduate of Harvard University with a degree in Computer Science, he worked in Silicon Valley for a number of years in investment banking and in the technology industry.

He is a documentary photographer known for his portraits of people living along the edges of society. His photography shares perspective with the work of Dorothea Lange, Richard Avedon, Diane Arbus and Sebastião Salgado.

I photograph people who skirt the edges of things; people whose connection to the broader flow is murky or obscured.  Mistaken as more, less or different than they are; they aren’t really seen and don’t really belong.  That’s everyone sometimes; but some more often.  I try to establish a line for a moment.  I hope to connect.  And I see the most beautiful and the most heartbreaking things.

To my thinking, the original human trauma is our separation.  We are too close not to need each other; and too far to trust each other.  We rely on dubious senses and clever devices to interact; but we are alone in our thoughts.  Lonely, insecure and uncertain; we pair, we group, we associate.  We try to belong and we seek to exclude.  We form bonds by geography, religion, economy and otherwise.  But it is all precarious.  We come together and we drive apart.

And we climb our ladder.  We step away from those who don’t belong and help those who do.  We are connected rung by rung – though less and less – as we push and pull.  But some do not climb; and below, the earth is littered with them.  They fit too poorly.  They stand apart.  They stand without.

And what of them; these ones who don’t belong or who are excluded; who don’t fit or don’t try?  Is there nothing they value?  Is there nothing of them we value?  I count it as a measure of our ignorance, the depth of poverty in the world.  It’s a glaring marker to how far we have not come.  Yet it has also driven our advance; on less fortunate backs and against less fortunate fate.

But is there really no connection there?  Does such fate – whether choice or circumstance – speak nothing of us?  Tell me we do more than advance in place; with so many left behind.  Or promise me we can do better.  Say we can reflect ourselves; us and them... That we can see the ways we overlap and distinguish the ways we grow apart.  And pledge that we can learn; to fit all of our misshapes; to reward value beyond charity and beyond the marketplace; to be better to each other; to be better ourselves.  And promise me it could be a better world. Or tell me we are at our best. 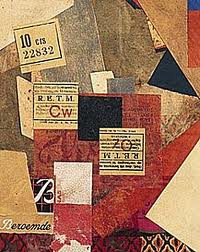 Born in Hannover, Germany, Kurt Schwitters (1887–1948) is one of the most influential artists from the interwar avant-garde. During a period of social and economic turmoil, he developed a unique practice, one that merged art and life, embraced disparate media and utilized found objects and printed materials, most of them the discarded remnants of everyday life.

In 1919, Schwitters named this body of work Merz—a neologism derived from the German kommerz (commerce)—which culminated in a series of collages, assemblages, experimental poems, prints and sculptures; the most famous being the Merzbau, a three-dimensional environment the artist began in the 1920s. Schwitters’s work bridges some of the period’s most important artistic movements, including Expressionism, Dada, Constructivism and Abstraction. Schwitters exerted a profound influence on artistic developments after World War II; Robert Rauschenberg and Jasper Johns, among others, considered him a source of inspiration, and contemporary installation art is inconceivable without the Merzbau.

Schwitters was trained as a painter, and despite his experiments with other media, he never ceased painting. Indeed, painting informs almost all of his work, as witnessed by the passages of gouache, chalk, oils, paste and watercolor in his collages and assemblages—additions that transform the materials they cover. 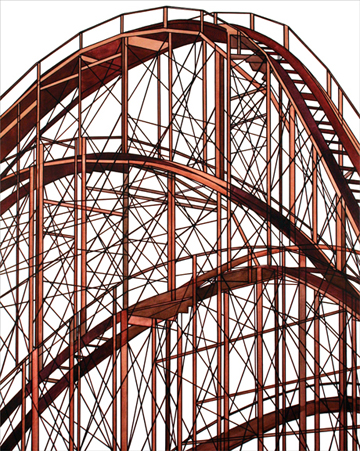 William Steiger's pared-down views of mills, factories, railcars, water towers, and landscapes offer neither judgment nor sentimentality. Drawing on the collective memory of an imagined future, Steiger employs expert editing to create clean, seemingly objective icons of often-romanticized elements of the industrialized world. Devoid of traditional landscape signifiers-a clear horizon line, shadow or ground-the paintings take on a surreal clarity, as if one sees the iconic objects of this collective memory in a newer, purer light. His steadily painted lines, just shy of the draftsman's fabricated vector, are imbued with a human quality that coaxes the viewer past the unsettling realization that the buildings are in fact abstracted geometric forms floating in space, and into a comfortable intimacy with the subject at hand.

Steiger also creates collage. In experimenting with the translation of his imagery to the assemblage of small pieces paper, Steiger found a new range of possibilities. He explains, "The materials and tools of the medium-paper, knife, and glue-allow me limited means to create pictures that emphasize their cut-out nature while forming complete multi-dimensional worlds." The artist's volumetric and perspectival spaces are contradicted by his emphasis of a flat picture plane, and it is the resulting tension and visual play that is his ultimate objective.

The work evolved from allowing the collages and paintings to interrelate. Richer and more complex than their starkly gessoed counterparts, the collages combine elements of found paper, navigational charts, marbled endpapers, maps and text, yet maintain a fidelity to the classic Steiger imagery. In turn, the new paintings have begun utilizing the layering elements of the collages; in Flyover, an airplane navigates over parceled farmland, in Luftseilbahn a tramway appears to hover over a snowy mountain.

William Steiger received an M.F.A in painting from Yale University in 1989. His works have been shown extensively in the United States, and included in exhibitions in Europe and Korea. Pace Editions recently published a new print by the artist. Steiger's works can be found in many prominent corporate and private collections. The strangeness will wear off and I think we will discover the deeper meanings in modern art. - Jackson Pollack

Vadis Turner's work is an intersection where color theory, abstraction, assemblage and feminism meet head on. The artist's innate color sensibilities and energy pay homage to the New York School of Abstract Expressionist and Action painters like Joan Mitchell and Willem De Kooning, by employing broad strokes of color. Through Ms. Turner's exquisite and unique use of materials such as ribbon, clothing, antique quilts, lace and yarn, the artist continues to explore and exploit traditional "feminine" materials and creates a contemporary dialogue as found in the works of artists such as Petah Coyne and Shinique Smith.

Turner states, "During the creation of my marital Dowry and Reception (Permanent Collection, Brooklyn Museum of Art), I became interested in the aesthetic bridges between diverse rites of passage. Elaborate ceremonies honor, idealize and purify the subject as they transition from one life chapter to the next. The subject simultaneously embodies a climax and demise. A new identity is conceived. An old identity dies. In this body of work, elements of ceremonial adornment are partnered with various processes of decay. Satin ribbons and flowers are fixed in a stilled state of destruction and removal inspired by fire or mold. Through consumption and repurposing, each process re-imagines the beauty and energy of change and loss.".

Turner's latest installation creates a delicate balance between sustainable and ephemeral, addressing elements like fire, mold and other forms of decay by combining elements from a proven path and a path less traveled. Together with the known and unknown, Vadis Turner crafts a visual kaleidoscope that draws the viewer into an otherworldly realm of aesthetics and beauty.

Vadis Turner earned her MFA and BFA from Boston University. Her work was recently included in New Acquisitions, Brooklyn Museum, Brooklyn, NY and Common Jive, Elizabeth Foundation for the Arts, New York, NY. Her work is in numerous public and private collections