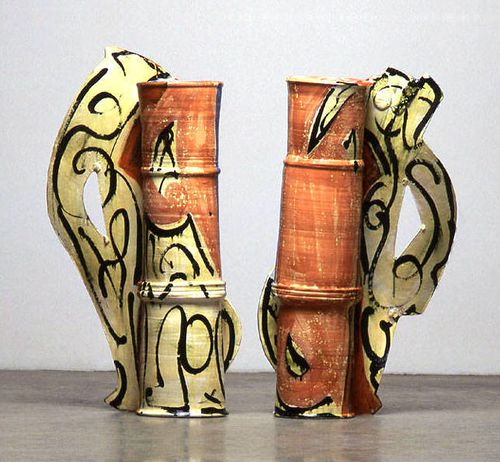 "It makes good sense to use clay for pots, vases, pitchers, and platters, but I like to have things both ways. I make things that could be functional, but I really want them to be considered works of art."

Betty Woodman is internationally recognized as one of the most important ceramic artists working today. Through her inventive use of color and form and her expert blend of a wide range of influences, she creates exuberant and captivating ceramic sculpture.

Employing many forms, from fragmented wall vases to bronze benches to pillow pitchers, she presents a delightful gathering of influences and traditions. Woodman has traveled extensively, finding inspiration in cultures around the world. Artist and writer Jeff Perrone has described Woodman’s remarkable ability to draw on many sources:

As a body of work, her ‘style’ is an ever-changing constellation of ceramic styles…This ceramic eclecticism is an implicit critique of modernist “purity”, the leveling of variety and difference. But Woodman’s eclecticism, her pluralism is not a scrambling or confusion of systems. It is the selection of what is best from various styles; it requires more care, more orderliness to be an eclectic than to apply a single standard or adhere to a single model.

For Woodman, this eclectic gathering is an essential part of her process:

"Things emerge in my studio from a seen image or experience that gets recalled in whatever work I am doing. The work becomes a conduit of the memory of a painting, a landscape, architecture, or some other visual stimulus. Once it starts to manifest itself in my art, the topic and subject then gets further researched in books, visits to museums, or by another trip."

Drawing no boundaries between traditions of fine art and craft, Woodman takes elements from the rich heritage of each and makes them her own. She uses the motif of the vase and the vessel repeatedly, allowing it to enrich her exploration of formal and painterly traditions:

"The centrality of the vase in my work is certainly a reference to a global perspective on art history and production.The container is a universal symbol- it holds and pours all fluids, stores foods, and contains everything from our final remains to flowers. The vase motif connects what I do to all aspects of art. I can mix the motifs of a classic Greek vase on one side of a triptych with the details of a Japanese print on the other all conveyed with a palette based on the hues of a recollected Hindu temple."

Professor of philosophy and writer Arthur Danto agrees about the solvency of the vase form in Woodman’s work:

Woodman’s vases project the use with which their meaning is connected, but at the same time declare their affinity with the Modernist art to which they owe their visual interest and originality. To live with one of Woodman’s pieces is to connect oneself with both sets of meanings- the eternal human meanings of the vase as subject, and the historical meanings of the vase as form.

Betty Woodman lives and works in New York City and Antella, Italy. Her work has been shown around the world in exhibitions in France, Italy, Holland and Japan. The Metropolitan Museum, New York had a  retrospective of Woodman’s work in June 2006. 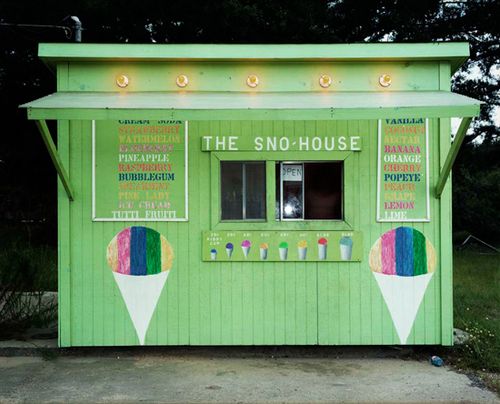 American Studies is a history story written in photographs of things. No people are visible in the finite world of Jim Dow’s America. Instead they are represented by their signs, totems, advertisements, storefronts--what anthropologists call artifacts. Since the photographs span more than twenty years of Dow’s work, American Studies shows a part of American life that may vanish, if it hasn’t already.

Jim Dow has a signature style that witnesses the openness and individuality of America. He has traveled the country numerous times, and all along the way taken photographs of its objects and buildings. There is a certain nostalgia in the personal and sometimes almost kooky signs and designs that Dow encountered in his travels, but Dow is no sentimentalist. He shoots straight. 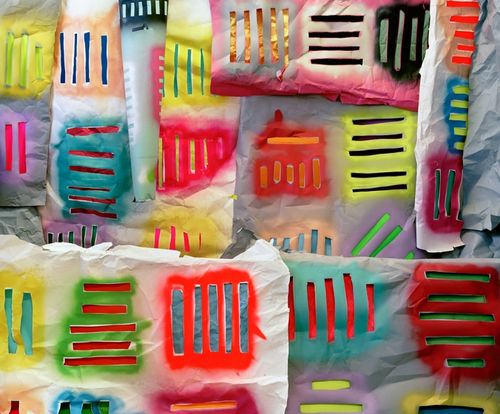 Consummating an improbable marriage between the ubiquitous trash photography and the modernist abstraction, Jessica Labatte serves up color shots of constructions of ordinary objects, either arranged in jumbled patterns reminiscent of Cubist paintings, or disposed into Minimalist forms. The calculated messes are the attention grabbers, adding an injection of Dada nonsense to the images, as when we see a room in which torn mats and bedclothes hang from the ceiling, under which a carrot rests on the arm of a plastic chair and some rolls of bread on its seat; the chair itself has been stacked on a pile of bedrolls, not to mention the tire on the floor next to a luminous abstract painting on plexiglass, and a pair of scissors and roll of duct tape—and that is only the beginning.

Curator George Tibbet writes, "Labatte's work has a certain whimsy mixed with artistic rhetoric that showcases the work in an almost uncategorizable manner. Yes it is Dada.... or not. Yes it is Cubist ... or not. And that is part of its attraction and interest." 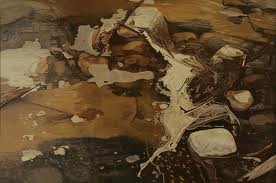 Ralph L Wickiser had a long and impressive career in art beginning in the 1930s where as a young man, he was encouraged to go into painting. A modernist abstract painter, Mr. Wickiser drew much of his imagery from nature, particularly, from the landscape near Woodstock, N.Y., where he had spent summers since 1948 and where he had lived since 1975.

His teaching career began at Louisiana State University in 1937. In 1959 he began working at Pratt, where he administered an art department whose faculty included Franz Kline, Jacob Lawrence, Roy Lichtenstein and Philip Pearlstein. In 1962 he founded the school's Graduate Programs in Art and Design and served as director, acting dean and chairman until 1975. He also published two widely used textbooks on art education.

“He was a well know painter, showed with Jackson Pollock, De Kooning, Motherwell, Georgia O’Keefe, all those people,” his son Walter says. “He wrote the first books on teaching Modern Art in America in the 40s and 50s. They were the most widely used texts in 600 colleges and Universities. He was close with Barnett Newman and Franz Cline.”