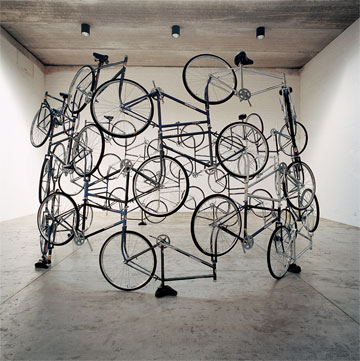 Ai Weiwei is a powerful and controversial Chinese contemporary artist who is  active in sculpture, installation, architecture, curating, photography, film, and social, political and cultural criticism.

Ai collaborated with Swiss architects Herzog & de Meuron as the artistic consultant on the Beijing National Stadium for the 2008 Olympics. As a political activist, he has been highly and openly critical of the Chinese Government's stance on democracy and human rights. He has investigated government corruption and cover-ups, in particular the Sichuan schools corruption scandal following the collapse of so-called "tofu-skin schools" in the 2008 Sichuan earthquake.

In 2011, following his arrest at Beijing airport on 3 April, he was held for over two months without any official charges being filed; officials alluded to their allegations of "economic crimes" (tax evasion). In October 2011 ArtReview magazine named Ai number one in their annual Power 100 list. The decision was criticised by the Chinese authorities. Chinese Foreign Ministry spokesman Liu Weimin responded, "China has many artists who have sufficient ability. We feel that a selection that is based purely on a political bias and perspective has violated the objectives of the magazine"