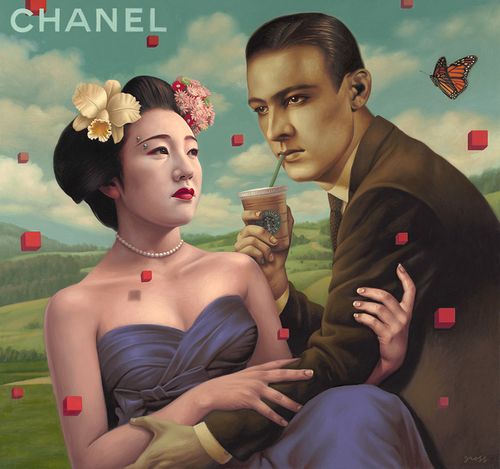 Alex Gross is an artist whose complex work crosses genres. Yes there is a low brow cartoonish type of feel but it is more sophisticated than that. There are also classical / international / new tech elements that lend to a commentary on modern life.

Drawing from a vast range of artistic influences, Alex has a keen interest in and appreciation of foreign cultures and world history. His paintings often contain references to both vintage Japanese and Chinese advertising imagery, as well as contemporary American advertising. Other important influences include Gothic Flemish painting, early American lithography, and Victorian wedding photography. Often in his work, Alex incorporates elements inspired by these diverse sources, as well as a comprehensive knowledge of art history, in exploring such themes as globalization, industrialization, consumerism, alienation, reconciliation, and mortality.

Alex Gross received a BFA with honors from Art Center College of Design in Pasadena, California, in 1990. Since then, he has achieved steady success as a gallery artist. Alex taught at his Alma Mater from 1994 until 2005, and was a recipient of two faculty grants there. A recipient of the prestigious Artist Fellowship from the Japan Foundation in 2000, Alex spent two months traveling throughout Japan, researching and collecting a wide variety of Japanese Fine and Commercial art. Part of his collection was compiled and published by Taschen under the title Japanese Beauties in 2004. The Art of Alex Gross, Alex’s monograph from Chronicle Books, was released last year to strong sales internationally. In 2007, Alex’s first retrospective museum show was held at the Grand Central Art Center in Santa Ana, California.