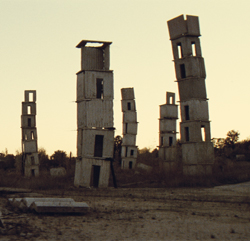 The contemporary artist most associated with ruins is probably Anselm Kiefer. He was born into a ruin, after all. That's to say, he was born in Germany in 1945. He was born into a place that had just been bombed to smithereens from the air and then smashed apart at the ground by the Allied advance on one side and the Red Army advance on the other. Kiefer's paintings and sculptures reflect a sensibility that was forged during the breaking and smashing of things, and then further shaped in an environment where one wandered through the wreckage.

Kiefer works with dirt and broken glass. He likes rusty metal. He paints in streaks of black and grey and in clumps of color that go on the canvas to rot. In a scene near the beginning of Sophie Fiennes' recent movie about Anselm Kiefer — Over Your Cities Grass Will Grow — we find the artist throwing dust and dirt over a large grey painting depicting forlorn tree trunks in a forest nearby. The entire painting, which must be somewhere in the range of 10' x 20', is covered and then shaken with the help of crane and forklift. It is, literally, unearthed from the rubble.

The rest of Fiennes' film is a lingering meditation on the spaces of Kiefer's longtime studio complex in Barjac, France, which he has recently abandoned for another site. During his many years there, Kiefer dug underground tunnels, deposited paintings and sculptures in rooms left over from the dilapidated silk factory that once existed there, burned things, forged giant books with blank lead pages, and otherwise constructed a landscape of ruin from his own imaginings.

The movie’s last scenes show Kiefer in the midst of directing the building of a series of concrete towers, many of them multiple stories in height. They are constructed in the haphazard manner in which you might build a tower out of playing cards, except with giant blocks of concrete. The towers totter and veer in all directions, some propped up with the giant lead books that Kiefer has been making for years. The result is a mini city of ruins. It is a city not of this time, or of any recent time. In fact, though the teetering towers are made of concrete and lead, they seem to have been brought onto the Earth from olden times, maybe the oldest times.