Claudio Parentela is a mixed media artist whose work crosses from cartoon to low brow art.

Born in Catanzaro, Italy where he lives and works, Claudio Parentela is an illustrator, painter, photographer, mail artist, cartoonist, collagist, journalist free lance. Active since many years in the international underground scene, he has collaborated with many zines, magazines of contemporary art, literary publications and comics in Italy and in the world 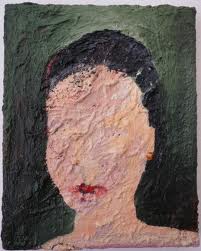 Combining both wit and admiration, seriousness and flippancy, Guy Rusha takes the art historical idea of male artist painting women as his point of departure. In his painting and sculpture it seems that he explores elements of traditional European portraiture in an effort to more simply and clearly present Her. To follow, for instance, his application of paint from painting to painting - now thick and heavy, now almost rude in its casual sparseness - is to sense Rusha's attentiveness and curiosity for how an image comes from, and into, material, and the ways in which oil paint records the precariousness of this resolution.

Across the paintings facial features often disappear to become hardly more than planes of dewy pink, elsewhere a figure's contour merges and dissolves into its ground. Out of these planes specific details might be homed in on, and not least those that serve to describe her femininity: red lips protrude, exaggerated in colour and size; a large gold earring glints or maybe a bright hair clip. These details seem almost deliberately stereotypical; they seem to be betraying a boyish gaze: boy looking at girl, young man looking to the artists that went before him.

There is a sense that Rusha is testing what the minimal elements necessary for defining Her might be, or more so perhaps, his imagined ideal of Her. Like the title of the exhibition, which positions the identity of his subject at the edge of naming and knowing, Rusha's images are at once vague and present, generalised and specific. The viewer is provided with no explicit indication of time, place or narrative to use as an entry point. Throughout the exhibition, in each work and in the space between them, similar questions thus loom: 'Who is she?' 'Is it the same woman in each painting?' 'Just what is he chasing?  A person?  An image? A sensation?' Because the way a painting's history becomes a stand in for the history of painting, under Rusha's watch painting is upheld as a durable time-based medium, a sensitive and accurate visual record of the interplay between decision-making, influence and intuition, and an increasingly rare activity in which revision is an act of both preservation and making.

Guy Rusha studied at the Slade School of Fine Art in London as well as the British School at Athens, Greece. Rusha has exhibited in galleries throughout London and Berlin. 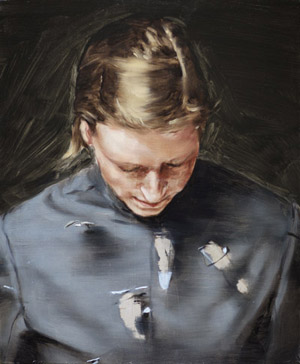 Michael Borremans’ drawings, paintings, and films present an evocative combination of solemn-looking characters, unusual close-ups, and unsettling still lifes. There is a theatrical dimension to his works, which are at once highly staged and ambiguous, just as his complex and open-ended scenes lend themselves to conflicting moods—at once nostalgic, darkly comical, disturbing, and grotesque. His paintings display a concentrated dialogue with previous art historical epochs, yet their unconventional compositions and curious narratives defy expectations and lend them an indefinable yet universal character.

Lone figures in pensive or semiconscious states are depicted squarely in the center of the compositions; while their faces are mostly obscured, a psychologically-charged mood prevails. Some are positioned within barren spaces reminiscent of an artist’s studio with planks or canvases arranged against walls, while others are portrayed luminously against dark, monochrome backgrounds. Titles provide simple but uncertain descriptions, which offer little help for unlocking the narratives.

Over the past decade, Borremans’ work has been the subject of solo exhibitions at a number of prominent institutions, most recently in 2011 with the comprehensive solo show Eating the Beard, which was first on view at Württembergischer Kunstverein Stuttgart and traveled to Műcsarnok Kunsthalle, Budapest, and Kunsthalle Helsinki. In 2010, he had a solo exhibition at the Kunstnernes Hus in Oslo as well as commissioned work on view at the Royal Palace in Brussels. Other solo exhibitions include kestnergesellschaft, Hannover (2009); de Appel Arts Centre, Amsterdam (2007); La maison rouge, Paris (2006); Kunsthalle Bremerhaven, Germany; and the Museum für Gegenwartskunst, Basel (both 2004). In 2005, he had a one-person exhibition of paintings and drawings at the Stedelijk Museum voor Actuele Kunst (S.M.A.K.), Ghent. The paintings then traveled to Parasol unit foundation for contemporary art, London, and The Royal Hibernian Academy, Dublin, while the drawings traveled to the Cleveland Museum of Art, Ohio. Work by the artist is held in numerous public collections internationally, including The Art Institute of Chicago; High Museum of Art, Atlanta, Georgia; The Israel Museum, Jerusalem; Musée d’Art Moderne de la Ville de Paris; Museum of Contemporary Art, Los Angeles; Museum of Fine Arts, Boston; The Museum of Modern Art, New York; National Gallery of Canada, Ottawa; San Francisco Museum of Modern Art; Stedelijk Museum voor Actuele Kunst (S.M.A.K.), Ghent; and the Walker Art Center, Minneapolis, Minnesota. He lives and works in Ghent. 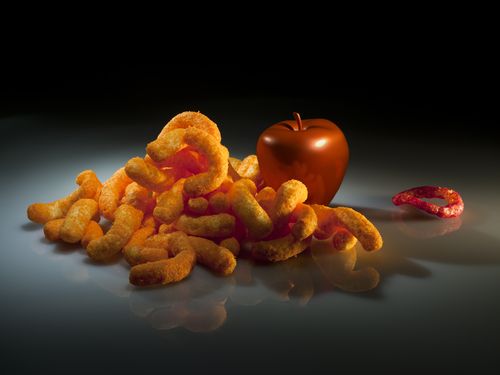 Chicago born artist Claudia Hart offers a unique perspective on the use of photography to showcase her psychological state of mind. Primarily using photography and animated video, Hart crafts compelling metaphors for Freud's das unheimlich (the uncanny) in virtual statues and models that are filled with human emotion, such as loss, pain and the fear of death. Psychically charged, these pieces present the viewer with objects that are simultaneously dead and alive - uncanny in the sense that they are realistic, but impossibly so. In addition to working with the human figure, Hart's recent musings on the death of food also feature in this debut of The Real and The Fake, a new series of photographs.

"The impulse to use technology as a means to control nature is inherently Modernist," says Hart. "There is a built in uncanniness in the tools, which create meta-planes that fix a user's body into a virtual space that is beyond time and death." Using 3-D digital media as a means to consider our culture's detachment from human vulnerability, Hart plays with the grotesque edge of the uncanny valley.

In Caress, our perception of a nude female figure is split between three video monitors, portraying a life-sized character "framed" within an imprisoning box or coffin. This figure strains against its confines. The image is black and white, sculptural, and imagined in relation to tomb sculptures and the portals of Gothic churches. As a result of this scenario, the camera literally appears to caress the figure. They are both, figure and camera, locked in an embrace: camera-to-figure sex. The virtual camera slides from shot to shot over the nude, who moves slowly from pose to pose. Originally composed with the woman lying on a divan, as an odalisque, Hart subsequently removed the furniture feature to accentuate the figure's eerie entrapment.

The Real and The Fake series are a set of still-life photographsthat contemplate the death of food. They are Hart's response to surreal trips down the aisles of her local supermarket, where the opportunity to buy anything that is not highly artificial or toxic is severely limited. The Real and The Fake photos are classical still lives of nutritionally-empty industrial snack-foods that nevertheless have appealing Platonic forms. Photos of these fake real foods are integrated with obviously simulated computer graphics of apples. In these images, the real and the fake implode. They are representations that are fake but seem real, and are real but seem fake. Their style is also a hybrid, bridging between classical still-life painting - Cezanne's apples! - and an industrial product shot.

Playing with notions of digital decay and the baroque, as another manifestion of the uncanny, Hart's Photo-mortifications brings the body into a virtual realm where it is mathematically "mutilated". In the photograph "Hell", Hart subjects a computer-modeled figure to irregular and fractal geometric deformations, and sets the body within an environment of technocratic architecture. Calatrava's hyper-Modernist Milwaukee Art Museum surrounds a body that simultaneously evokes rot, decay and rational algorithmic permutation - creating a tension that rejects the vacuousness and oppressive anonymity of bureaucratic techno-culture. 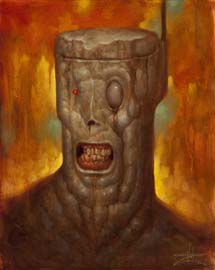 Chet Zar is a painter whose work straddles the macabre with the classical. Broken, compelling and disturbing, his subjects reach out to the viewer from beyond the canvas and demand attention and compassion.

Zar, a Scorpio, was born on November 12th, 1967, in San Pedro, CA. His childhood was spent drawing, sculpting and painting.

Zar has a natural fascination with all things strange and fostered  a deep connection to horror movies and dark imagery. He could relate to the feelings of fear, anxiety and isolation that they conveyed; Themes that are reflected in his work to this day.

The combined interest in horror films and art eventually culminated into a career as a special effects make up artist, designer and sculptor for the motion picture industry, designing and creating creatures and make up effects effects for such films as, "The Ring", "Hellboy I & II", "Planet of the Apes" and the critically acclaimed music videos for the art metal band Tool.

In 2000 (at the suggestion of horror author Clive Barker), he decided to go back to his roots and focus on his own original works and try his hand at fine art, specifically painting in oils. The result has been a renewed sense of purpose, artistic freedom and a clarity of vision that is evident in his darkly surreal (and often darkly humorous) paintings.