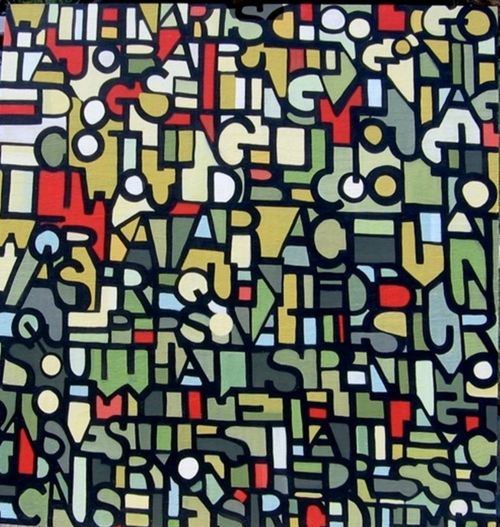 Derrick Hickman is an artist whose paintings bridge the gap between typography and fine art. They possess a certain lyricism and grace but also engage the mind with recognizable messages.

"My recent work builds upon the theme of myth vs. memory, which has been the focus of past paintings and sculptures.  I have used the process of story telling to introduce the viewer to my own memory and its conflict with self perpetuated folklore, as it is related to my development as an artist.

In these paintings, I have literally projected text onto the canvas in an enlarged diary form.  These snippets of personal narrative have been abstracted through color patterns and text distortion.  Despite the scale, visibility and appeal of color, the abstractions are meant to obstruct.  It gets between the audience and the story, much like the way romanticism, ego and drama tend to taint our recollections." 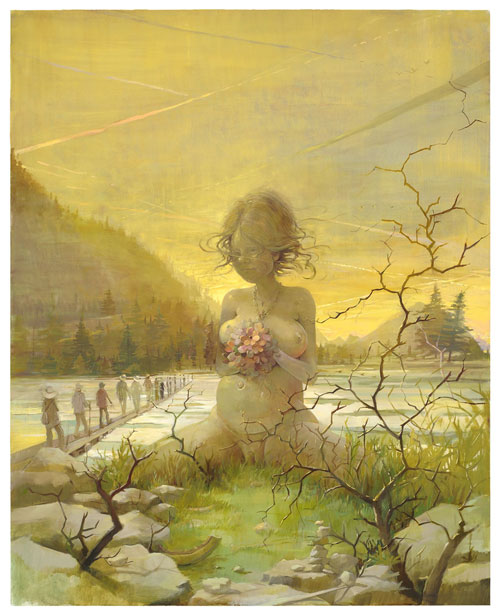 Lisa Yuskavage is best known as the creator of female figures whose outrageous proportions evoke Edgar Degas nudes posed by Hans Bellmer. Her polarizing work has been variously described as "perversely pledged to vulgarity," "discomfitingly kitschy," and "utterly sincere." Critics and curators have likened walking into a Yuskavage show to "falling into a candy-colored fever dream" and tell of emerging with the sensation of having eaten too much cake.

"Painters have to create space for themselves," says Yuskavage, who has staked out her territory with pictures that pack a one-two punch of titillating, often-bizarre imagery and dazzling technical prowess. Whether blithely sucking on a lollipop or splayed on a table in a nod to the through-the-peephole tableau of Marcel Duchamp's Etant donnes, the compositions' figures also seem content to be "over here by myself."

In a pivotal artistic decision Yuskavage turned her women around to face the viewer, mined her subconscious for disturbing scenarios, and began experimenting with what she describes as "kinky sfumatos," redeploying her arsenal of representational painting techniques in the service of subversion.

"The only things we tend to feel really comfortable with are the things that we already know," says Yuskavage. "I remember seeing Philip Guston's late paintings and having that wonderful feeling of hatred toward them and then becoming a maniac fan." It's a reaction she learned to trust. "If something is so offensive or makes you feel like there's something off, maybe there's something to it." Her latest works, most of them created on a grand scale, are the result of snowballing associations. "I would begin with something random that I found or had in mind, or a piece of a painting I had made a long time ago — some small thing — and then build on that, associate from that, and just keep adding to it," 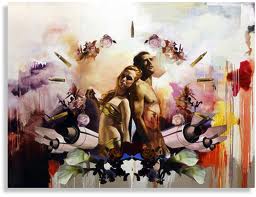 Working in oils on linen and aluminum panel, Chloe Early has developed a unique style that is simultaneously lush and raw. The romantic and the gritty meet in her paintings, which tease out a distinctively poetic worldview through the juxtaposition of extremes. At their core is a sensitivity to lyrical feelings and themes—love, beauty, innocence, softness—which collide with more worldly symbols of aggression and degradation, such as bullets, bombs, urban refuse, and ruins.

Yet Early avoids any kind of resolution, or even overt narrative. Rather, she simply allows these opposing elements to float in space and intermix, creating a charged atmosphere that suspends a definitive reading or conclusion. The effect, though disorienting, suggests the achievement of psychological or spiritual wholeness, however momentary. 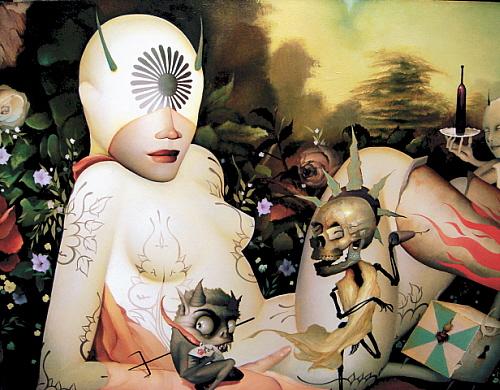 Painter Dan Quintana is a Bosch for the 21st century, his immaculately rendered paintings depict a surreal limbo of dark characters engaged in nefarious activities. His colour palette and technique reflect the style of the old masters, but the tone is undeniably 21st century with the addition of cars and sex

This video tells it all: