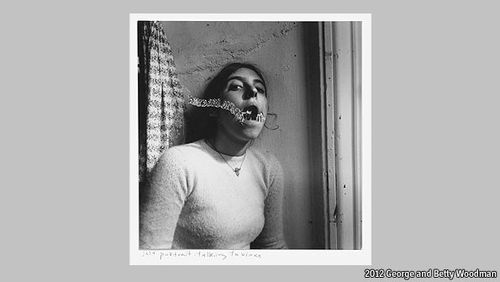 Francesca Woodman (1958-1981) has an esteemed artistic pedigree. She was the daughter of ceramicist Betty Woodman.

Francesca was an artist decisively of her time, yet her photographs retain an undeniable immediacy. With their spectral figures dissolving into Gothic ruins, the black-and-white photographs of Francesca Woodman look so antiquated as to be thoroughly modern in our nostalgia-riddled digital age. She shrouded herself in sheets of plastic, smeared Vaseline on mirrors, and tucked herself into vitrines. In some of her pictures her nude body appears as a solid form, all contours and negative space, like a prop in a Man Ray photograph. In others the only evidence of her body is a pair of legs underneath a diaphanous blur.

Her entire oeuvre was created in a remarkably short period of time; Woodman leaped to her death in 1981, when she was 22 years old. Her precocity has prompted some critics to whisper that her posthumous reputation rests as much on the spooky shadow cast by her abrupt death as it does on the work itself. Others have levelled condescending compliments about her ability to convey, in the words of one, “a girl’s visual equivalent of ‘Catcher in the Rye.’”

Dimitris Polychroniadis sculptures are grand misoscenes, full of drama, that attest to his theatrical training in set design. They are monumental even in their small scale.And highly emotional and impactful.
He says, "Religion often serves as an emotional 'lender of last resort' in times of crisis. The idea for this series of maquette sculptures, comes from Christian church signs and billboards in the US. By stripping these religious quotes away from their physical and emotive context, the 'message' becomes more absolute, almost surreal. To emphasize this further, the text size has been exagerated in scale (compared to the figurines) and colour. The project is somewhat 'street' influenced by large scale advertising and slogan graffiti. The title of the series generates a contrast: The notion of God-sent miracles as an integral part of religious faith, against the marvels of man-made, modern age, industrial technology and it's products such as fluoerscent materials and colours. Materials used: cardboard, foamboard, blue foam insulation material, sand, wood, maquette fugirines and trees, MDF, acrylic and spray paint, found minature of the Parthenon (plaster-made)."
Photography by Michalis Dalanikas & Dimitris Polychroniadis.

Dimitris Polychroniadis was born in Thessaloniki, 1975. Lives and works in Athens, Greece. Dimitris is a qualified Architect with BA Hons & Diploma in Architecture as well as a Master of Arts in Urban Design, aquired at the University of Greenwich in London.He has attended the Scenography workshop classes at the Athens School of Fine Arts during the academic season 2001 - 2002. During 2011 Dimitris has started to make mixed media sculptures that strongly originate from his architectural and theatrical background.

Jeff Chien-Hsing Liao loved documentary and street photography — until an internship at Magnum Photos led him to a sobering conclusion. “You go through their contact sheets and it strikes you,” he said. “I was never going to be better.” But he could be bigger.

Over the last 10 years Mr. Liao has produced a series of urban panoramas where he has married the precision and color of large-format film with the manipulations of digital processing (though more recently he has been using a custom-built medium format digital camera). The results are huge, intricate prints full of light, textures and a hyper-real perspective. But a closer look will reveal impossible combinations of light and detail that could not be captured in a single exposure.

Some of his images require multiple shots over a period of six hours or more. His recent digital work has him using a long lens to take “a couple of hundred” frames of scenes like Times Square where only a sliver of pedestrians are in sharp focus, while the backgrounds goes soft. It is a world that exists solely in his mind — and in prints.