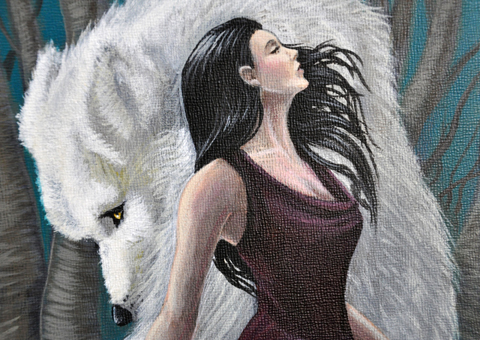 Epic journeys come to mind when viewing the imaginative paintings of Zach Schoenbaum. Often venturing beyond the realm of reality, he creates magical characters that inhabit distant worlds of fantasy and wonder but with convincing realism.

Zach Schoenbaum was diagnosed with over-imaginative strangeness at a young age. Born to a Japanese-American, nomadic mystic and a musician-turned-strongman shortly before the breakdown of their relationship; he spent the first years of his life in a series of cheap housing along the North American Pacific Coast, pondering the difference between animals and humanity.

After a four-year-long coming of age ritual in a Hawaiian compound, Zach returned to the mainland to live with his father and study art. The next few years of exploring the Los Angelean jungles and a short stint in the land of his mother's ancestry prepared him to finally start his rigorous training at Otis College of Art and Design. Once the dust had settled, the flames were doused, and the blood was mopped away, he emerged with a degree clutched in shaky hands, and set out into the world.

It is said that he now roams the digital plains, hunting freelance gigs and occasionally encountering online communities of others who share his overactive imagination and talent for embellishing the mundane.

thanks very much for this great post! i had a lot of interesting thoughts while reading this which i might just put into action right away. thanks

Thanks for this Very useful info You Have Provided us. I appreciate your article, big thank you for your sharing, and I too share your opinion completely … its really excellent post.