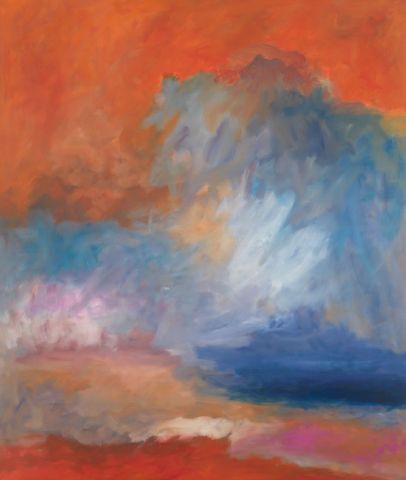 "When I speak of nature, I speak of the sky, because the sky has become all of nature to me. But it is most particularly the brooding, storm-ridden sky over the Sound of Sleat in which I find the living image of past dreams, dreams which had emerged from memory and the swirl of paint. Here I can see the drama of nature charged and compressed. Lands form, seas disappear, worlds fragment, colors merge or give birth to burning shapes, mountain snows show emerald green. Or, for a long moment, life stops still when the gales pause and the sky clears after long days of careening sound and horizontal rain or snow"

John Schueler was an American painter with the sensibility of an abstract expressionist.

His formative experiences painting landscapes came in Scotland in the 1950s. He says "There now have been three massive experiences I have had with the Scottish sky. The first, in March 1958, when I had given up and, aching in my head and eyes and soul, I cycled from Mallaig Vaig to the white sands of Arisaig, where I watched the snow clouds moving toward me, implacable, from the sea. One passed over and through me, snow beating against my face. Then I turned to the south and saw the winter sun glowing in the snow cloud; strange image of light burning and dying through the shadows of a changing form. Though the sun was a winter sun, it translated itself in my mind to the most powerful and vibrant colors, reds, yellows, Indian yellows, or sometimes alizarin through blue."

From the 1960s onward, the colors in his paintings covered a narrower range, suggesting mood, rather than motion. Schueler's handling of his medium became more delicate and expressive in his paintings as he further developed his personal artistic aura, and moved beyond Abstract Expressionism.