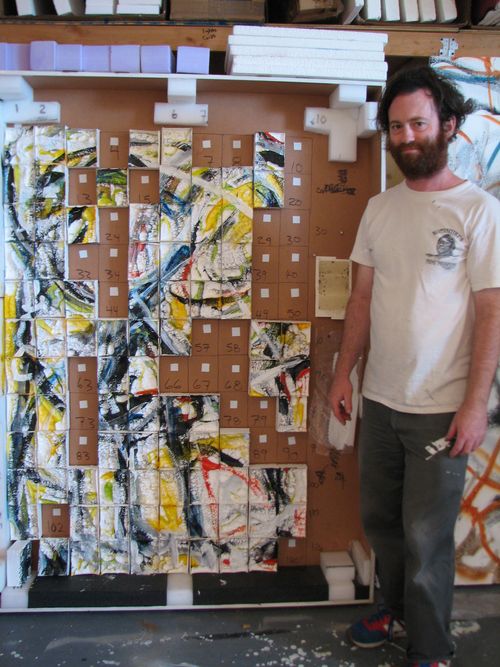 To call Matthew Miller a painter might be considered simplistic. He paints and sculpts at the same time creating relief paintings. This is because his  canvas is industrial material such as styrofoam which, when treated and painted, begins to change shape and decompose.

"The general process that I use to create my work involves painting on the polystyrene first, and then treating the painting with chemicals. The result is a piece where each mark of paint substantial enough to resist the solvents, whether it be in depth, or width of line remains at least partially on the surface while the negative space recedes and decays around each mark I have made. The patterns the foam melts into creates a weight and value for the negative space that causes it to seem equal to, or in many instances more significant than the marks themselves. Whether it be painting with a brush, dripping or splattering, the application of the paint becomes almost secondary to the result of the process. The action of painting is also very important to me, it is the record of my improvised movements, and decisions. The process following my expression serves to enhance, warp, and kill the original painting. By chemically reducing the ground of the original painting, I am creating tactile surface and literal depth around and within the mark, through which the viewer is capable of entering the painting." 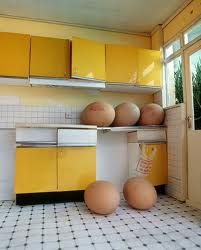 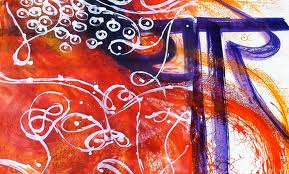 Jayanthi Moorthy is an artist whose work contains deep spiritual elements with a well of vibrant colors and energies.

She explains,  "I try to depict the material and the metaphysical aspects of life. For the material aspect, I use subjects from nature, as I perceive their organic forms, texture, lines and colors. For the metaphysical aspects, I draw inspiration from the inner spirituality that manifests in the everyday lives of Asian women. I enjoy depicting their social, cultural and spiritual conflicts. They display a mixture of beauty, strength and weakness.

Each canvas is a message, composed from calligraphy, acrylics, oil pastels, ink and paper collages, and made with non-artist tools (like a comb, the broom, a stub, bare hands etc.). The heavy textures and vibrant colors are probably narrative of my responsiveness to the varying cultures of the east and west. My canvases are longish, un-stretched pieces of cloth and paper that can be rolled away like a scroll that is carrying a message."

Jayanthi talks about her art in this short video: