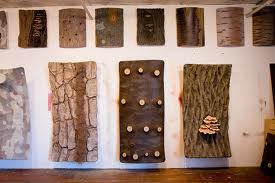 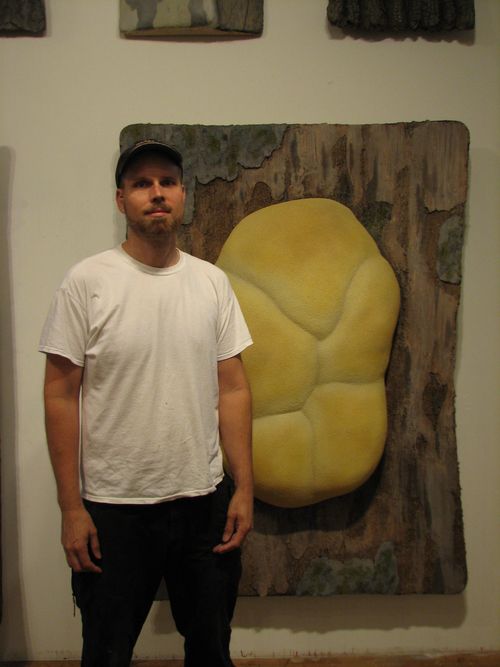 The art of Eric Lindveit draws us to the expected - a side of wood, a tree trunk, an organic form - that soons becomes unexpected because it is not what it first appears. As he describes, "These works, built of paint, paper, burlap, pencil, and sawdust, explore the epidermal personification of surface via the petri dish of sylva and evidence my curiosity about the conception of what is real. They are not, however, intended as science. I am informed by observation of New York City street trees, often damaged and diseased, and pre 20th century hand colored medical and natural history books but I have no interest in making simulacrum of a subject one would be better served to see in the round outdoors. Rather, via scale change and invention, I am making greatly exaggerated composite portraits that combine my interests in surface, identity, entropy, and the skin of paint. They belong to the built environment."

The series "Skin Conditions" and "Sylvan Natural History of New York" are part of a growing vocabulary of smaller works that evoke displays of early anatomical wax models. As much dimensional drawing as painting or sculpture, they're inspired by an exhaustive series of hand colored books started in 1842 titled the "Natural History of New York", a thirty volume, fifty two year attempt to depict all things flora and fauna in the state of New York.

The human scaled "Parade Shields" are built on articulated box springs, singles and doubles, and sit on steel mounts 6 to 18 inches from the wall like blown up sylvan potato chips. The title refers to ceremonial objects from the 15th and 16th centuries, like Andrea del Castagno's shield "David with the Head of Goliath", that were carried in pageants, civic processions, and spectacles. Usually made of wood, painted, and even carved in relief, some Parade Shields may have been used as symbolic protection from enemies, while others celebrated noblemen's enthusiasm for classical antiquity and mimicked Ancient Roman triumphae. Art is a parade of ideas, perceptions, and symbols.