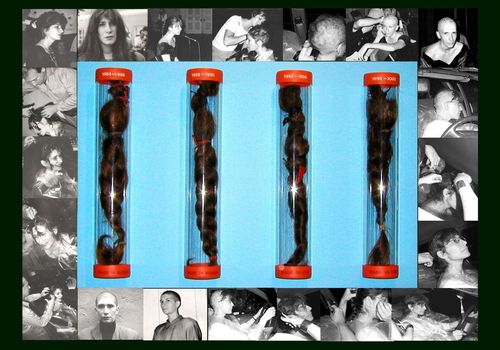 She cuts her hair every 4 years, on the same day (night), August 31st, harvesting it for her Braid Collection which is displayed in clear tubes. She explains, "First it was a symbolic haircut in 1984 before moving from Kharkov (Ukraine) to Moscow, starting new “moscow time”. Date of that haircut coincidently fell on the date when influential Russian poet Marina Tsvetaeva committed suicide in 1942."

Braid #3. 1992-1996, Made in USA. Performance at the Cleveland International Performance Festival.

While each performance was created differently, some parts, developed at different times, became traditions. The last performance included a live video mix of documentations from previous shavings. She dedicates this project to all women who have lost their hair against their will.