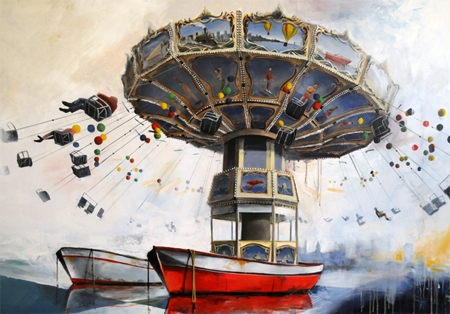 Jake Messing does not content himself with strictly illustrative paradigms. He tries to go beyond what is seen with what is implied.

"My work is deeply rooted in drawing and painting. Layers and textures are built up, torn down and obscured repetitively, constantly changing the original intention into something completely different, yet perfectly attune to what I feel. There is a play between growth and decay both in terms of imagery, text, and media. I take depictions of scenes, objects, and people around me and recast them as visual metaphors within larger works that speak of psychology, and the struggles of life. My work, instead of providing a distinct conclusion, operates more as a catalyst for questions, discourse and ways of seeing."

Jake Messing was born in Northern California in 1982. He graduated with a BFA in Illustration from Parsons School of Design in May 2006. Messing works in a wide variety of media, ranging from silkscreen to pen and ink to paint and collage. His work has been shown in galleries and art fairs across the US, Canada and Europe. He has been invited to lecture at numerous prestigious universities and design studios. Messing recently returned from a two-month residency at CAMAC Center D’Art in France preparing work for his most recent solo show. He presently lives and works in Brooklyn, New York. 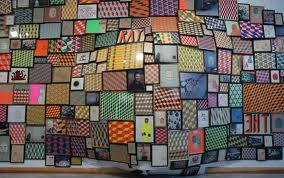 Fusing together found and invented imagery, tags and assorted objects Barry McGee draws on a range of influences including the Mexican muralists, tramp art, the graffiti artists of the 70’s and 80’s and the San Francisco Beat poets to create a unique visual language.

The work has the strong immediately recognizable visual signature of the best graffiti art, but is also enormously poetic and evocative. It communicates the artist’s strong empathy with people who have been left behind by contemporary society.

Also known by his street name, twist, Barry McGee has a large following in the street art community. He has been working on the streets of San Francisco, his native city, since the mid 1980’s where his images continue to endure on walls, mailboxes and other surfaces despite the continuous campaign of public authorities to paint them out.

McGee has long resisted showing his works in museums and commercial galleries but he has recently become more active ion the conventional art world context. His work was featured in a solo exhibition at the Walker Art Center in Minneapolis, at Brandeis University’s Rose Art Museum in Waltham, Massachusetts in 2004 as well as in his 2005 solo show at Deitch Projects, entitled One More Thing.

A lauded and much-respected cult figure in a bi-coastal subculture that comprises skaters, graffiti artists, and West Coast surfers, Barry McGee was born in 1966 in California, where he continues to live and work. In 1991, he received a BFA in painting and printmaking from the San Francisco Art Institute. His drawings, paintings, and mixed-media installations take their inspiration from contemporary urban culture, incorporating elements such as empty liquor bottles and spray-paint cans, tagged signs, wrenches, and scrap wood or metal. McGee is also a graffiti artist, working on the streets of America’s cities since the 1980s, where he is known by the tag name “Twist.” He views graffiti as a vital method of communication, one that keeps him in touch with a larger, more diverse audience than can be reached through the traditional spaces of a gallery or museum. His trademark icon, a male caricature with sagging eyes and a bemused expression, recalls the homeless people and transients who call the streets their home. McGee says, “Compelling art, to me, is a name carved into a tree.” His work has been shown at Walker Art Center, Minneapolis; San Francisco Museum of Modern Art; UCLA Hammer Museum, Los Angeles; and on streets and trains all over the United States. He and his daughter, Asha, live in San Francisco. 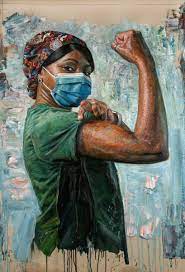 Tim Okamura is a painter whose work deftly incorporates portraiture with street art.

He says in his own words, "I have often drawn parallels with other creative mediums in order to explain my artistic outlook and aesthetic inspiration. I think using music as an analogy, in particular, has been helpful because of the commonality of our exposure and experience with it. So, I often say that in the same way I have very eclectic musical tastes in music - an affinity for rock, jazz, classical, blues, and hip-hop - I similarly find inspiration in the work of artists as diverse in range as Rembrandt, Degas, Basquiat, Lucien Freud, Richard Diebenkorn, Larry Rivers, Wildstyle graffiti writers, and street art.

In particular, I think early hip-hop best characterizes my approach: it was all about sampling a classic groove, or quintessential hook, and putting it in a new context, with a harder beat driving the track, and new words, new ideas layered on top. I like to think of the academic elements of my work - the faces, figures, - as being the classic groove while the urban motifs (doorways, Brooklyn walls, warehouse loading docks) serve as the beat, and the graffiti, written, and symbolic elements are the new messages, or even "pop culture" ideas layered on top. Separately these elements are familiar, but juxtaposed against one another I hope they take on a new meaning and create a new experience for the viewer. It's the spirit of the hip-hop dj or more recently, the mash-up dj that I hope to channel.

In the same vein, I aspire to have my work capture on some level the jarring and provocative visual encounters of New York - a hugely important influence - maybe best exemplified by taking the subway from the heart of Brooklyn to go see the Rembrandt exhibition at the Metropolitan Museum of Art: within thirty minutes you could go from looking out the window at some amazing, fresh graffiti on a brick wall somewhere to then being exposed to a timeless ode to human experience captured in a soulful self-portrait by one of the great masters of figurative art."