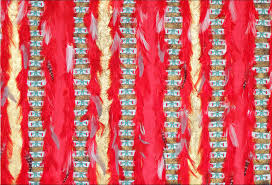 Artist Maria Creyts creates extraordinarily long photos depicting subjects she designs from textiles.  Her works are concerned with hand-sewn garments as subjects in same-scale photography.  Large photo compositions and the clothing subjects themselves are often exhibited together with the matching image and subject just out of view of each other.  Complete ensembles suspended on hangers seem like mysterious gallery goers whose boldly patterned dress outshines the individual to the point that we do not see him or her at all.

In 2012 the artist focused on custom clothing design while preparing an African-themed fashion collection for Kansas City’s West 18th Street Fashion Show.  Through this, she acquired further skill in sewing and explored how clothing design and construction could help in planning a purpose for her sewn subjects beyond the photo shoot.

During December and January 2011-2012, Creyts spent time learning batik techniques in Nigeria under artist Niké Davies Okundaye with the goal of introducing the artist’s own hand into her photo friezes through designing fabrics for photography subjects.  For the menswear ensemble she photoed, Creyts used hot wax to draw and print imagery on 7 yards of seersucker.  The motif used unites the amusing story of her visit to an African palace with traditional Nigerian stencil designs that portray a European royal couple.

Maria Creyts is a graduate of Yale University School of Art and her studio, ESTUDIO mariaurora, is in Kansas City, Missouri.  The artist’s photo friezes have stretched over walls at the Visual Arts Gallery of the University of Lagos, Nigeria (2012), Leedy-Voulkos Art Center in Kansas City (2011), and Centro Fotográfico Manuel Álvarez Bravo in Oaxaca, Mexico (2010).  In "Panoramic Patterns” (Kansas City Star, 4/21/2011), critic Dana Self described the artist as "...a curious media traveler, someone who refuses to let a material’s limitations or its nature stand in the way of her inquisitiveness.”  artist website:  http://mariaurora.net