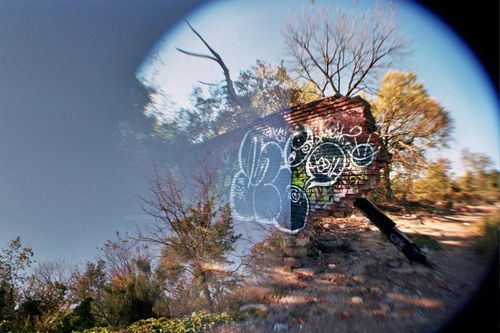 Leah Oates captures time and space in her photographs. She says, "The work I create first originates as a response to space that is in a continual state of change. In everyone there is a sense of flux and a familiarity with this type of space.

Transitory spaces have a messy human energy that is always in the present yet constantly changing. I find them endlessly interesting, alive places where there is a great deal of beauty and fragility. They are temporary monuments to the ephemeral nature of existence."

The power of the photographic image has always been to stop timeÑto create instant artifacts. But these days, since digital media has overwhelmed the processes by which photographs are made, this original logic seems to have been turned upon its ear. How do we judge a static reality when images are considered as mere samples of perception rather than documents of beauty commingled with truth? It is equally a matter of the photographic image, the objective it depicts, and our approach to it. The photograph, if taken in consideration of static and transitory elements, can be said to share time with reality, because as a document it represents both the actual and the symbolic.

The photographs of Leah Oates are meant as documents not of an object frozen in time, but animated by it. Hers is a visual register similar to the literary trope called Òstream of consciousnessÓ in which the perspective of the writer--in this case the artist or viewerÑcreates a fluidic narrative that affects the way the text is recognized as a metaphor for actuality. It is not filled with symbols but is symbolically actualized.

In her recent series of photographs, Leah Oates deals with physical areas in Newfoundland, Beijing, China, and in several public parks in of New York City including Pelham Bay, Jamaica Bay and Prospect Park. What unifies all these areas is that they share once wild or cultivated natural areas with post-industrial, post-residential ones. She creates fantastic vistas that, despite not being attached to the same static environments of her previous collectionsÑthat dealt with consumer detritus in an urban sphere of lost spaceÑOates is dealing with nature as a by-product of Bourgeois appetites for conspicuous consumption, an idea that was birthed in the late 19th century with the advent of cities built around industrial habits. So called Òcivilized peopleÓ were attempting to maintain the rituals of court society in a post-imperial world. These manicured and landscaped environments created a doppelganger to the grounds of great castles like Versailles or Vaux-Le-Vicompte, or city parks such as the Luxembourg Gardens. Over the interval of progressing eras, these parks shifted in the use value and their reference to the urban areas surrounding them.

In her famous book about urbanism and urban blight, The Death and Life of Great American Cities, Jane Jacobs talks about how neighborhoods that are organized around a public park invariably lose their focus as communities, and become centerless. This is because they do not resemble court society, but a more complex version of Main Street America, in which services and residences take up different areas not always en face with one another. The community that develops in an urban community is interior and is unified by ethnicity and nationalism and their shared commonality, not by imposed class-based values. Parks in cities changed as the 20th century progressed, because they suffered the same fate as the streets ringing them. They became places that nobody went, for not only were they in disrepair, they were a loss of ideals, a degradation of a glorious past, a ruined purity. Yet today many of the parks have been returned to a version of their glory, in some case s completely re-landscaped so as to hew to the original wishes of their historical builders and preservers. In OatesÕs images they take on a wildness that is both diffuse and sublime, like entering a glade in a place weÕve never visited before. Oates reaffirms the primal character of nature by allowing the eye to meander and vibrate among optical perspectives enlivened by the rigor of the transitory.

Alternatively, the images of hers originating in faraway places such as Newfoundland and Beijing tend to reference abandoned residences around which nature is slowly creeping and taking over, turning them into mordant relics; or she focuses specifically upon objects such as electric and telephone wire towers, silently connecting human communities while creating an industrial periphery in uninhabited areas that are otherwise entirely natural. They are metal and energy totems representing the value system of human will with only the sky, wind, and clouds to symbolize and lay bare the alternately implied and emphasized manifest destiny that utility structures and the system of organic interactions that is nature itself, mean to one another.

Leah Oates brings our impressions of both worlds into one frame. Who could look upon any of her scenes and not agree that she had transformed our trained esthetic expectations into a manifestation of reality that creates beauty in its path, not because it makes the image more precious, but because they make us feel more alive. Like people who share a single space but never at the same time, always looking out the same window but perhaps seeing completely different things, we are given the chance to share moments of transcendent fragility that approach the originality of the empirical. 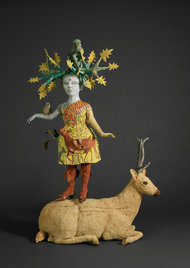 Kathy Ruttenberg’s themes started taking shape in the early 1980s; her concern with the figure, the natural world and human relationships is evident in efforts that included painted papier-mâché sculpture, painting and jewelry. But she didn’t come into her own until about 15 years ago, when she turned to glazed clay after enduring a painful divorce and moving to the country, where she lived full time with a retinue of rabbits, pigs, cats, dogs and goats. Inspired by them, the woods and their inhabitants, she began constructing a wonder world in which species merge and figures serve as landscapes. Trees grow out of heads and hips; they colonize the skirts and bodices of a spiky-haired woman (Ms. Ruttenberg’s chief protagonist) and the pant legs of her occasional male figures, like the immense one titled “Manscape.” Insects and animals abound, including owls peeking out of holes in tree trunks.

Ms. Ruttenberg’s latest efforts make her a force to contend with as a narrator and symbolist, a form maker and colorist. Coating sexual tensions with a storybook innocence, she works in a triangle bordered by Louise Bourgeois, Viola Frey and Beatrix Potter. Her blunt figurative style relates to those of Stephan Balkenhol, Claudette Schreuders, Alison Saar, Kiki Smith and, in a way, David Altmejd. She also draws on the centuries-old tradition of porcelain figurines while studiously ignoring all boundaries, especially those dividing insider and outsider; art and craft; and high, low and kitsch.

The elusiveness of love may be Ms. Ruttenberg’s über-theme. Her often large figures remind us that the animal kingdom has an order in its relationships — thanks partly to the food chain — while humans can suffer a chaos of ambiguity and ambivalence. In “Special Species” a tiger prowls over the shoulder of a woman with a third eye, while an alert deer dominates the front of her skirt; on the skirt’s back the reality of the tiger killing the deer almost shocks. In another piece an anxious, seemingly female figure wearing a pink dress and holding a flower turns out to have stubble; the title — “He Likes Plants” — doesn’t mention an attraction to female clothing. Again and again, Ms. Ruttenberg’s environmentally astute fantasies assert that human companionship may be hard to sustain, but, like it or not, we are one with nature.

From the New York Times