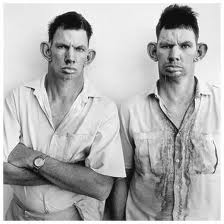 Roger Ballen was born in New York City, New York, USA in 1950. He has lived in Johannesburg since the 1970s. Beginning by documenting the small dorps or villages of rural South Africa, Ballen starting photographing the inhabitants of these places in the late 1980s and early 1990s.

He transformative work capture an almost Diane Arbus effect on his subjects. They draw you in but can often repel.

"I have been shooting black and white film for nearly fifty years now. I believe I am part of the last generation that will grow up with this media. Black and White is a very minimalist art form and unlike color photographs does not pretend to mimic the world in a manner similar to the way the human eye might perceive. Black and White is essentially an abstract way to interpret and transform what one might refer to as reality. My purpose in taking photographs over the past forty years has ultimately been about defining myself. It has been fundamentally a psychological and existential journey. If an artist is one who spends his life trying to define his being, I guess I would have to call myself an artist."