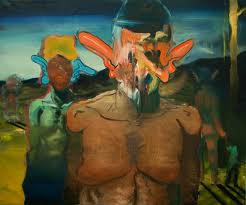 Kenrick Mcfarlane (b. 1990) is a Jamaican-American artist living and working in Chicago. In his work, Mcfarlane combines representational and illustrational imagery with abstract gestures to create complex figurative paintings.

In 2010, Mcfarlane had his first solo show entitled “Face Off” at the Gene Siskel Film Center. In 2012, exhibitions by Kenrick Mcfarlane included “The King of Crooks” which was shown at Morton College, and also “The Tipping Point of Me and We” at Little Black Pearl Art and Design Center. The exhibition was also hosted by the Contemporary Arts Council and curated by Tempestt Hazel.  Later in 2012, Mcfarlane was chosen by Kerry James Marshall to participate in an exhibition curated by Dawoud Bey entitled, "Eclectic Coherence” The show was held at Expo Chicago located at Navy Pier.  Kenrick Mcfarlane is currently working towards his BFA at The School of the Art Institute of Chicago.

McFarlane describes his process in this interview video: 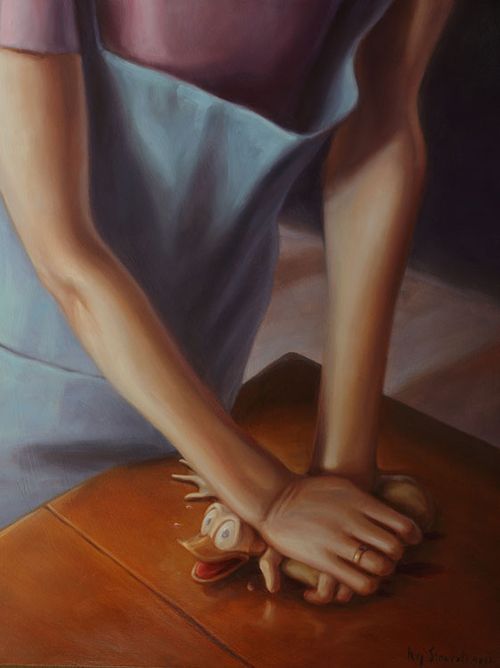 Finnish artist Kaj Stenvall is embracing his inner duck with his series of duck paintings. And not just any duck. This particular subject is very reminiscent of Disney's Donald Duck.

Kaj Stenvall created the duck that launched his career and has since appeared, in one form or another, in each of his paintings, in 1989. In its early incarnation, the figure was clearly related to Walt Disney's Donald Duck and Uncle Scrooge. More recently, the likeness has grown more nuanced.

Stenvall's duck is highly adaptive. It is neither sexless nor ageless, though its gender and age shift, as do its skin color and appearance. In some paintings, it occupies center stage. In others, it remains on the sidelines. It is a transparent and easily identified caricature, an all-familiar icon of Western pop culture. For Stenvall, it is also a universally recognizable symbol of humanity.

The duck is not Stenvall's alter ego; rather, it is his tool. Its purpose is to offer a jumping off point into the multidimensional world of Stenvall's art, to draw the viewer deep inside his paintings and then, to step aside.

Although Stenvall's duck is soulful and humane, it is not human. It is adaptable, flexible and free. It is a symbol of postmodern identity -- identity that absorbs external influences and founds itself upon the uncertainty and relentless quest that characterize our times. And it offers those who find it difficult to ground themselves in our continuously shifting socio-cultural environment, a familiar form with which to identify.

In the Art World

Kaj Stenvall paints with oils. He begins with a warm-hued underpainting and covers that with layer upon layer of color. His paintings do not, however, look old. Stenvall does not aspire to create "precious" art. Rather, for him, painting is a vehicle that allows him to interpret human emotion.

Stenvall knows art history and honors its traditions. His paintings move seamlessly within the context of Western art history. His efforts of the 1990's are particularly rich with references to stylistic trends and individual artists, including Diego Velázquez, Johannes Vermeer, Eero Järnefelt and Edward Hopper. Landscapes evocative of German romanticism provide backgrounds for many of his works, as do interiors and portraits reminiscent of the Dutch Golden Age. Stenvall does not hide the myriad influences on his work. Rather, he celebrates them. And viewers, too, can exult in recognizing the multi-layered allusions in Stenvall's body of work.

At times, Stenvall places his duck in contexts inspired by other media. Some of his works are heavily influenced by film, others, by comic books or literature. Silence is their unifying force. Stenvall's paintings often have a meditative quality that springs from either melancholy or nostalgia.

Stenvall's most significant efforts, however, involve pop art and surrealism. His paintings return to pop art the figure borrowed from popular culture, and reunite them thematically or stylistically. And while his playfulness and treatment of the absurd may evoke Magritte's surrealism, Stenvall is perhaps most naturally considered heir to Finland's own "Turku School" surrealists of the early 20th century.

In this video, Stenvall discusses his process and his art: 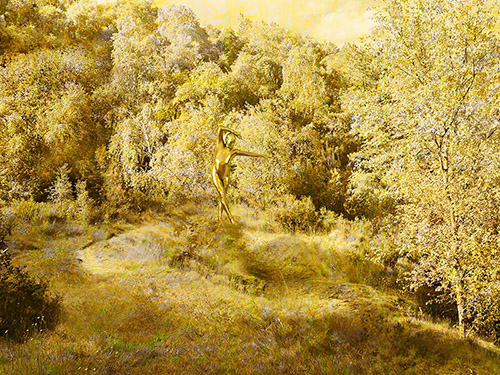 Photographic Artist Jim Read from Derbyshire in the UK has been a lifelong autodidact. Read creates photographs (he is clear to say "Make and not shoot. Shots come out of guns") and then puts them together into one full image.
"I've alway been the late learner having been self taught it takes longer for the light to dawn especially the creative one. I was scared as well the blank white screen is just as intimidating as a piece of paper or canvas. I had listened to D. Hockney bang on about copying on Radio 4 everytime he came back home and now Tracey Emin's at it as well. They gave me a push, why shouldn't I try to copy what others do? So I started and looked and looked at Catherine McIntyres images not only to see what she'd done but how as well.  Gradually I moved away fom the copying and used the Derbyshire countryside around me to make images that really pleased me. Where I am at the moment is making stuff that looks 'real' but is actually composed of many layers brought together in harmony. Years ago I came across the work of Annie W Brigman I've liked the figurative genre of image making ever since. I use a covered figure in my images to allow the model to pose in ways that are not restricted by connotations of gender and age, the figure thus clad becomes just that a figure within the image."
The image you see here is called 'Permeable light' and consists of four photographs merged together in harmony. The land under all three is permeated by shafts and tunnels some dating back to the Roman occupation.  They follow the seams of lead to be found all over the area, the spoil from their endeavours became footpaths and ideal places to impose a figure in the landscape. Time appears both to stand still here and at the same time race through its history. 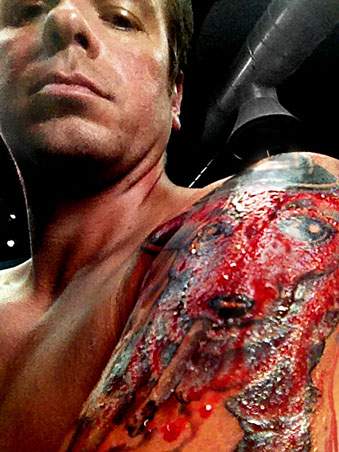 Some artists are also provocateurs. Some add performance to their static art. Petro Wodkins is one of there artists.

He says, "Many people ask themselves what 'art' is. Lately the definition seem to be that art is what an educated artist creates. That's a funny definition. Compare it to 'shoes is whatever a shoemaker creates'. In truth, art has grown into a small club of people repeating what people did 40 years ago. Thereby art has almost lost it's place in society. But the evolution is dangerous. In a free thinking society art is one of the most important parts. Art's role has always been to provoke and force people into seeing new perspectives. Therefore art must be anarchistic. Art must question power and money. Art must oxide by it's own rules. Only it's own rules."

Q&A with the artist:

I'm an artist and a performer. I look best on stage, especially from my left side.

What is your background?

Since I was born I have mainly been occupied with my dog and revolutionizing the global art-scene. Before that I was a sort of businessman.

Why are you questioning the established art scene?

To be an artist today is more about the right cultural middle-class background than about telling stories from the world. It's more about excluding and less about inviting. Or to put it another way: most artist cannot dance.

What are your plans for the future?

I will be very surprised if you don't find out.

You also sing, is that a part of your art?

You could as well ask if my art is part of my singing. The music always comes first.

Could you tell us about your sources of inspiration?

God has always been a great source of inspiration. And of course my own looks. Apart from that I like Petro Wodkins, the russian artist from early 20th century, and some of George Bush's art, even though his work got sloppy towards the end.