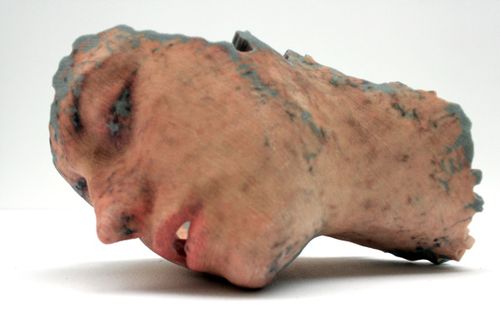 Passionate about the world of photography, Lorna Barnshaw is devoted to celluloid film, but more explicitly to camera-less techniques. She offers an usual medium - 3D printing - to create her art.

“Photographers were supposed to do more than just see the world as it is…they were to create interest, by new visual decisions.” (Sontag., 1979)

Barnshaw creates through a means of destruction, employing the material nature of celluloid film that allows it burn, blister, mark and contort, producing abstract still and moving images. By utilizing some sensitive compounds it became possible to create true motion from a singular image, as opposed to the illusion of motion generated by a series of images propelled at 24fps. In the ‘Still Movement’ series, motion was created with an application of wax that melted and morphed with the heat generated from the lamp of a slide projector.

The work explores the current coexistence of analogue and digital mediums in both film and photography. Taking advantage of the materiality of celluloid film and the ethereal elements of digital, the two are united portraying a sense of nostalgia whilst welcoming the future of technology. True motion can only exist in reality or analogue format but it is digital that enables the work to exist everywhere. Key influences include artist, Tacita Dean and filmmaker, George Melies.

In her recent series she explores the latest innovations in 3D printing and augmented reality that  morph the human form to become even more realistic and somehow magical. Mask-like human face sculptures form the ‘Replicants’ series. The series is inspired by creating digital simulacrums of the physical world. Barnhaw’s passion for the convergence of digital art and sculpting has led her to created a triptych of 3D Prints that represent human faces. Each facial sculpture has a different aesthetic depending on the different computer applications and software used in its creation, such as Autodesk, 3D scanning or computer animation. “I interfered with the software as little as possible, comparing the digital attempts at replicating reality”, Barnshaw expresses in her website.