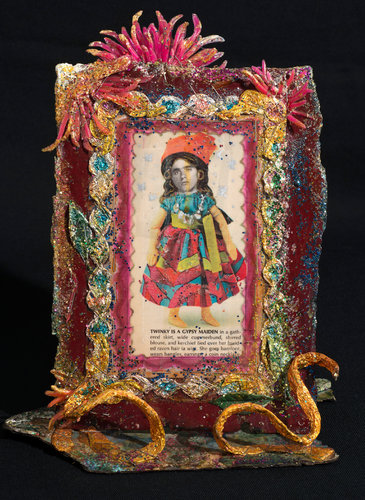 A pop-cultural connoisseur with a magpie’s eye for what shimmers and shines, Thomas Lanigan-Schmidt has been using plastic wrap, reflective foil, colored beads, pipe cleaners, glitter, staples and photographs for more than 40 years to create shrines to saints, sacred and secular, emblematic of queer identity. He includes himself among the elect in an early collage titled “Twinky as a Prima Ballerina (Self-Portrait),” completed in 1969, the year of the Stonewall Rebellion, in which he participated.

Lanigan-Schmidt began by exhibiting his art in his own apartment; an early major exhibit in 1969 was titled The Sacristy of the Hamptons. Another home exhibit was titled The Summer Palace of Czarina Tatlina.  In these early home exhibits, and also in at least one later recreation of an early exhibit, he guided visitors through the exhibit in drag in character as art collector Ethel Dull.

While Lanigan Schmidt's art is not widely known, he has received critical acclaim.

Reasons for Thomas Lanigan-Schmidt's art not reaching a wider audience totally elude me. This is major, major work, reflecting and augmenting today's dialogue in a unique and commanding voice. Many artists, including a generation of Lanigan-Schmidt's students, have been repeatedly amazed, inspired and guided by its panache, rapier-sharp wit, subversiveness and opulent beauty.

Do you mind if I quote a few of your posts as long as I provide credit and sources back to your site? My website is in the exact same area of interest as yours and my visitors would definitely benefit from a lot of the information you provide here. Please let me know if this ok with you. Thanks a lot!