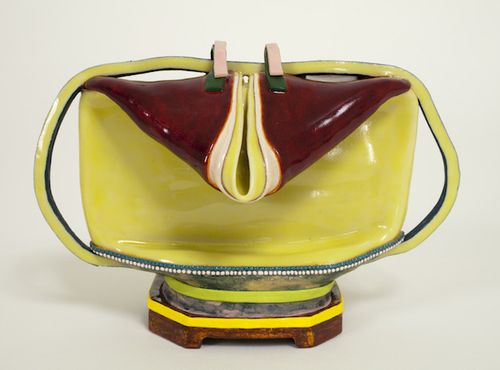 John Yau of Hyperallergic says, "Kathy Butterly is an American original whose closest forbearer is George Ohr (1857–1918), ‘The Mad Potter of Biloxi.’ The formal traits she shares with Ohr include a penchant for crumpled shapes, twisted and pinched openings, and making (as Ohr was understandably proud to point out) ‘no two alike.’ Working within the confines of the fired clay vessel, Butterly has transformed this long established, historical convention into something altogether fresh and new, melding innovation to imagination so precisely that it is impossible to separate them. To this earlier observation, I would now add: For this and many other reasons, Butterly is deserving of an in-depth museum survey."

Consider the intersection at which Butterly has chosen to work, and you get a sense of her ambition and genius. While maintaining a modest scale, she continually reinvents the fired clay vessel (cup or vase) in ways that exceed anything anyone else has done in the medium. From the unique base to the distinct body (creased, collapsing, convoluted and twisted), to the diverse surface, which can run from smooth to craqueled, often in the same piece, to the saturated color (sunshine yellow, fleshy pink, Veronese green and fire engine red), to minute details (yellow lozenges the size of an elf’s pat of butter), everything (including the spills and stains) in a Butterly sculpture attains its own particular identity.

Butterly’s commemorations of misshapenness contradict a basic assumption in ceramics and, by extension, art, which is it is possible to make a perfect or ideal form, achieve a timeless beauty. The postmodern converse of this ideal, that one can make a perfect corpse (or copy), is well known. Butterly doesn’t buy into these models, with their roots in Plato (the ideal) and Aristotle (classification). Rather, she seems to believe that change is central to experience. In shaping her vessels, she folds, bends and twists the clay, recognizing that anxiety, worry and vulnerability are inherent to existence. Unable to escape time and the constant, multiple pressures it applies, she transforms those forces into contours and forms that are simultaneously goofy and shy, fantastic and disenchanted, gaudy and thwarted, sexy and monstrous.