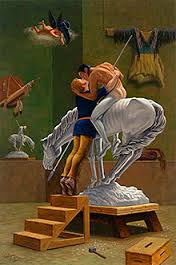 According to Hyperallergic, Kent Monkman’s art commingles art history with cultural mythology in a passion play about masculinity and belonging. His paintings and diorama use just enough camp to make the works feel self-aware, like the moment in a dream where you realize where you are, wake up, and reflect on the madness.

By his overt references to paintings of nearly every art historical period, from the caves of Lascaux to Veronese to Francis Bacon, Monkman asserts himself as both a traditionalist and an iconoclast.  He raises his voice for native populations transcending the devastation of colonialism, while depicting their struggles in the language of European painting.  In doing so he stakes new ground and claims a territory for himself as both an artist and a descendant of those originally displaced.

Kent Monkman is an artist of Cree ancestry who works in a variety of media including painting, film/video, performance and installation. Monkman has exhibited widely within Canada, and is well represented in numerous private and public collections including the National Gallery of Canada, the Art Gallery of Ontario, and the Montreal Museum of Fine Arts. He is represented by Sargent's Daughters in New York, Trepanier Baer Gallery in Calgary, and Pierre-François Ouellette art contemporain in Montreal.