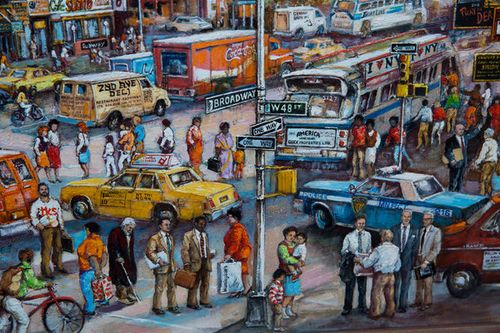 As an outsider artist, she has been following her muse for many years, capturing images of a changing city.

Websites like the Lo-Down had reported that the two buildings at 400 and 402 Grand Street were part of a 1.9 million square-foot development known as Essex Crossing. The project’s website shows drawings of what is to be: Towers rising from boxy metal-and-glass bases.

Mrs. Pagremanski set out to show what is — and what, for a century or so, had been: Two red-brick buildings, one taller than the other. The owner, the city’s Department of Housing Preservation and Development, says they will have to go if the project is to proceed. As Mrs. Pagremanski puts the finishing touches on her canvas, the buildings are still standing.

“We have learned that whatever was, isn’t,” Mrs. Pagremanski said from behind her easel. “I once went to the Landmarks Commission and said, ‘What buildings are coming down?’ And they said they never know until the wrecking ball hits. And that was about 20 years ago.” Mrs. Pagremanski has completed more than 80 landscapes from sidewalk perches.

She puts people in her paintings, but only if they have paused and told her their stories. In the roundabout way that life experience can affect an artist, she makes them witnesses to the here now, gone soon scene that she is documenting.