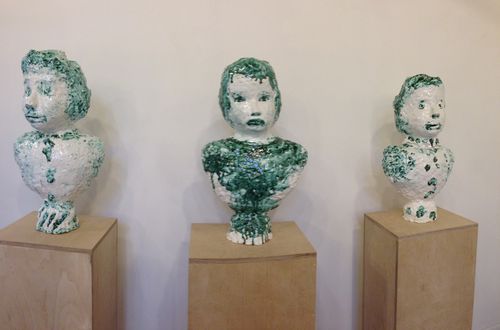 Elisa Siegel is an accomplished sculptor whose work has appeared in numerous galleries and museums. She combines carefully arranged theatrics with a folk art sensibility (indefinite features, rough texture) to create a scene that, like other tableaux of hers, both charms and unnerves. Realism, only a starting point here, has been disturbed and skewed into foreboding dreamscape.

The creepiness comes, in part, from Siegel’s process of golemlike creation. She molds her hollow figures whole out of clay coils, cuts them up to fit body parts into the kiln, then reassembles them— a sequence that came to her by happenstance (the kiln wasn’t large enough).

In her recent show in Bushwick Brooklyn, Siegel offers a collection of serene, ghostlike busts on custom built pedestals that seem to float across the landscape.