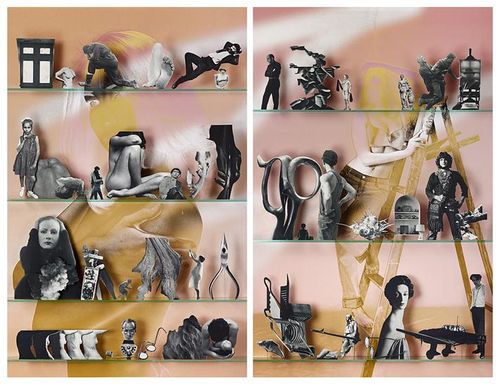 His recent work “Library” is based on images from Time-Life’s 1970s seventeen volume set of books called “Library of Photography”, Lipps cuts out and assembles selected images into groups that echo the themes of the different volumes – Photographing Children, The Camera, Travel Photography, Special Problems, etc.. Mounted and arranged on shelves in front of vivid color backgrounds, the figures become players in a story that is both a tribute to the heyday of analog photography and an accomplished vision of the possibilities that the digital age has opened up to artists.

The colorful backgrounds of the series come from 35mm photographs taken by Lipps when he was a student and their warm emotional color and abstract feeling contrasts dramatically with the coolly objective black and white figures and forms selected by Lipps from the “Library” books.

Combining authored and appropriated photographs Lipps sets up a tension between the subjective and objective uses of the medium offering both an intriguing and fresh perspective on the history of the medium and history itself.

Matt Lipps received his MFA from the University of California, Irvine. Most recently his work has been shown at the Saatchi Gallery, FOAM (Foto Museum of Amsterdam), and is currently on view at Pier 24 in San Francisco. His work is in the collection of Los Angeles County Museum of Art, Museum of Contemporary Art, Los Angeles, the Hammer Museum, Los Angeles, The Pilara Foundation/Pier 24. He is Assistant Professor of Art at San Francisco State University. Lipp's work can currently also be seen at Art in General and in the group show "Under Construction - New Positions in American Photography" at Pioneer Works in Brooklyn. 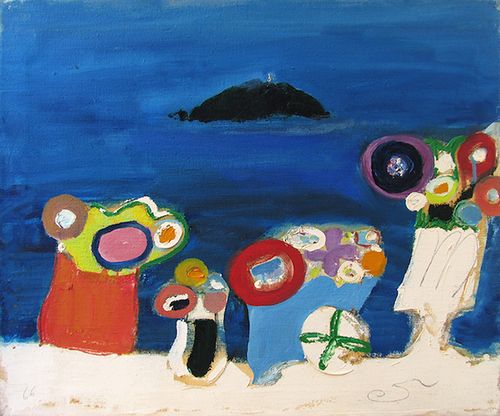 Edith Schloss was the consummate insider/outsider of the New York School. One of the few female members of the Club — the historic, testosterone-fueled den of the Abstract Expressionists — Schloss knew everyone who was anyone during the 20-year cultural ferment in postwar New York. And then, in 1962, she left for a three-week visit to Rome and stayed there until her death at 92 in 2011.

Schloss was born in 1919 in Offenbach, Germany. Her family escaped to England after Kristallnacht, and she eventually found her way to New York, where she studied at the Art Students League while working at menial jobs to support herself. Within a year or two she had become part of the circle revolving around the painter and writer Fairfield Porter, the painters Elaine and William de Kooning, the poet and critic Edwin Denby and the filmmaker and painter Rudy Burckhardt.

Never wedded to a single approach, Schloss’s paintings proceed from an entrancing combination of observation, imagination and material experimentation. There is a try-anything spirit effervescing from them, a spirit first manifested in the early 1950s when she turned to assemblage — a striking departure from her early watercolors and oils, which, aside from one remarkable abstraction, “Games” (1947), and a painting of the young Jacob grabbing a hard-boiled egg from a well-laid breakfast table (“Egg Eater,” 1950), depict whimsically rendered landscapes and still lifes.

The hard materiality of assemblage (one of the pieces on display, made around 1953, is subtitled “Homage to Joseph Cornell,” whom she and Burckhardt visited at his Utopia Parkway home in Flushing, Queens) may have endowed Schloss’s later paintings — beginning with the breakthrough works she made after she settled in Rome — with a newfound sense of the physical. These uncommonly alive paintings, freewheeling in design and exploding with color, delight in the disparities among the hard and viscous textures of paint, the specificity of the scrawled line, and the cool, smooth field of an empty, or nearly empty, canvas.

In the last twenty years of her life, Schloss turned to mythology as a subject, not as a sign of aesthetic retreat (see Pablo Picasso and Giorgio de Chirico), but as an explosion of unbridled libido, dominated by swatches and splats of high-key, often contrasting color, with untethered lines and strokes floating across fields of blue, green and orange.