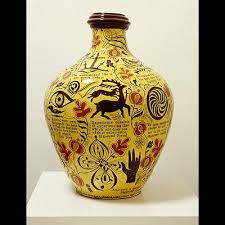 Grayson Perry, CBE is an English artist, known mainly for his ceramic vases and cross-dressing. Perry's vases have classical forms and are decorated in bright colors, depicting subjects at odds with their attractive appearance

Perry's work refers to several ceramic traditions, including Greek pottery and folk art. He has said, “I like the whole iconography of pottery. It hasn't got any big pretensions to being great public works of art, and no matter how brash a statement I make, on a pot it will always have certain humility ... [F]or me the shape has to be classical invisible: then you’ve got a base that people can understand”.

His vessels are made by coiling, a traditional method. Most have a complex surface employing many techniques, including “glazing, incision, embossing, and the use of photographic transfers", which requires several firings. To some he adds sprigs, little relief sculptures stuck to the surface. The high degree of skill required by his ceramics and their complexity distances them from craft pottery. It has been said that these methods are not used for decorative effect but to give meaning.

Perry challenges the idea, implicit in the craft tradition, that pottery is merely decorative or utilitarian and cannot express ideas. In his work Perry reflects upon his upbringing as a boy, his stepfather's anger and the absence of proper guidance about male conduct. Perry's understanding of the roles in his family is portrayed in Using My Family, from 1998, where a teddy bear provides affection, and the contemporaneous The Guardians, which depicts his mother and stepfather.

Much of Perry's work contains sexually explicit content. Some of his sexual imagery has been described as "obscene sadomasochistic sex scenes”. He also has a reputation for depicting child abuse and yet there are no works depicting sexual child abuse although We've Found the Body of your Child, 2000 hints at emotional child abuse and child neglect. In other work he juxtaposes decorative clichés like flowers with weapons and war. Perry combines various techniques as a “guerrilla tactic”, using the approachable medium of pottery to provoke thought.

As well as ceramics, Perry has worked in printmaking, drawing, embroidery and other textile work, film and performance. He has written a graphic novel, Cycle of Violence. Perry frequently appears in public dressed as a woman and he has described his female alter-ego variously as “a 19th century reforming matriarch, a middle-England protester for No More Art, an aero-model-maker, or an Eastern European Freedom Fighter,” and “a fortysomething woman living in a Barratt home, the kind of woman who eats ready meals and can just about sew on a button”.

In his work Perry includes pictures of himself in women's clothes: for example Mother of All Battles (1996) is a photograph of "Claire" holding a gun and wearing a dress, in ethnic eastern European style, embroidered with images of war, exhibited at his 2002 Stedelijk show. One critic has called Perry “The social critic from hell”. In 2011 Grayson Perry curated the Tomb of the Unknown Craftsman at the British Museum.