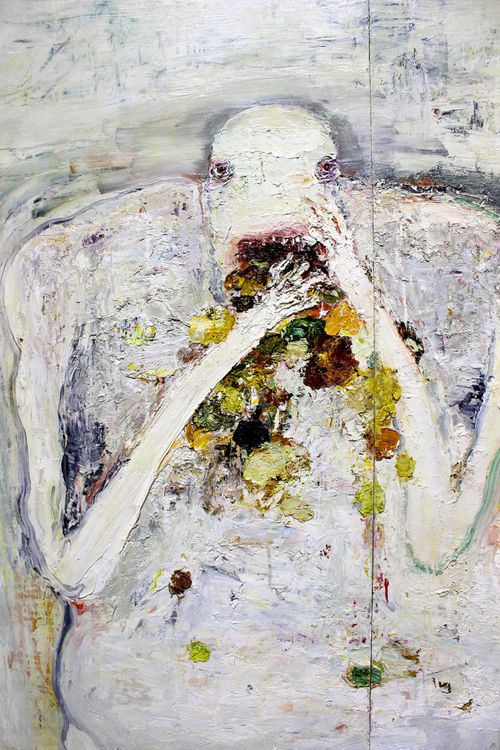 Brenda Goodman has been steadily doing her thing for decades, moving from early success within the Cass Corridor movement in her native Detroit, to a varied career in New York City, and finally to her current retreat in the relative sanctity of the Catskills. Her “thing” is a little bit difficult to sum up, perhaps, because over the course of this long and productive career, her creative output has vacillated between painting and drawing (with forays into three-dimensional constructions); smooth surfaces and chaotic buildup on canvas; and intimate small-scale works and jaw-dropping large paintings that grab your eye from across the room. But all these works come from a place of deep personal perspective and wildly messy emotion, and, as a newcomer to Goodman’s works, this strikes me as relevant to a contemporary conversation about women artists and female identity writ large.

Goodman’s oeuvre includes two intense self-portrait series that were a means for her to deal with personal struggles around her weight and physical appearance. Anyone who has battled with weight or issues of self-image will instantly recognize the selected self-portraits included in the second, painting-focused career retrospective, Brenda Goodman: Selected Works 1961–2015 at CCS’s Center Galleries, as mirrors of despair and self-loathing. “Self Portrait 4,” from Goodman’s first paintings about body dysmorphia, depicts a bald and chalky-white figure, vaguely female inasmuch as her nude form indicates labial folds and the suggestion of breasts, but more ghoul than girl. Eyes stare vacantly at the viewer, as she crams substances into her mouth with both hands. The image is appropriately manifested by the intense building up of material on the surface of the canvas; viewed at very close range, the figure’s hands and the food seem little more than piles of oil paint. Despite the density and chaos of this creation, and the desperation of the figure, Goodman’s skill as a painter salvages beauty from this horror.

Ten years later, following the loss and eventual regaining of nearly 70 pounds, Goodman launched a second self-portrait series, featuring a more naturalistic figure — still chalky-white with body parts hanging in folds like a plucked chicken. To combat the vulnerability of presenting a more literal image of herself, Goodman painted several of the figures in this series with their faces hooded. But the most aching iteration of these portraits is the one that depicts Goodman in her studio leaning against the wall in contemplation of the very portraits that she constructed out of her own self-loathing a decade hence. There could not be a more potent poster image for the demoralizing experience of body dysmorphia, and to put that kind of personal struggle on display in a world as aesthetic and unforgiving as that of contemporary art is an act of courage and self-revelation.