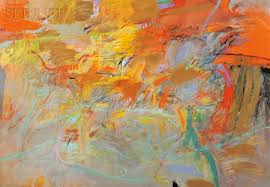 As a young man, open to the influences of the late 30’s and 40’s [Leo Manso] found social realism too doctrinaire. He was drawn to color as a major means of expression, and sought to master the understanding of color and its usage through the study of Persian Miniatures, the Siennese masters, Klee, Matisse, Bonnard, and the folk arts of many cultures. Early awareness of Sung masters showed him the bridge between East and West, for to him they had achieved the same ambient space, light and atmosphere as Turner and Monet. [Manso] sought an art of transcendence approached through meditative participitation.

In 1947 Manso set up his summer studio and home in Provincetown. He helped organize Gallery 256, the first artists regional cooperative of that era. Among it’s members were Barnet, Botkin, Browne, Busa, Campbell, Candell, and Daphnis. The gallery acted as a Salon des Refuses, encouraging exhibitions, lectures and discussions by artists not in sympathy with the Provincetown Art Association’s more academic jury system.

As early as 1948 Manso had exhibited with avant-garde groups. During that same year he helped organize the “Formations” group in New York, exhibiting with Ferren, Lipton and Marca-Relli. He was active in the American Abstract Artists exhibitions which included, among others, Albers and Ben Nicholson. Through the film maker and photographer Thomas Bouchard he came to know Kurt Seligman and Fernand Leger.

In discussing Manso’s early work he insists that it be described as “Abstract Impressionism” because of his interest in light and atmosphere, but for me there are affinities with the Abstract Expressionism of many of the artists he knew at the time. A powerful movement was underway, which owed a great deal of its strength to a meeting of the minds, at least on the surface. One of the principal ideas of this new art was to encourage multiple interpretations. The viewer as well as the artist were free to evoke imagery from the unconscious.

[Manso’s] earliest paintings were subjective and autobiographical, based on personal reaction to nature. In this he had much in common with the plein air artists and the Impressionists, but unlike them he did not seek to capture the visible. He painted what nature evoked, concretizing his emotion. Resonances, echoes, memories, stirred by direct confrontation with nature were his concern. And so, his work, lyric in spirit, was filled with light, air, enveloping space.

Manso speaks of the impact of Turner and Monet, how Turner makes the viewer part of the vision, not as observer, but as a participant in the vast drama of nature. Monet, in his late paintings produces similar sensations, for in his Nympheas series there is no horizon, no base. It is as though one is in the experience, an existential position.

In his early period, seeking to express himself, Manso, like Jacob with the Angel, wrestled with his ego. In the second period he [modified] this by submerging himself in the collective symbolism of Eastern thought. In the NOW, Manso, like Kandinsky, is in the closest possible touch with the spiritual in art.