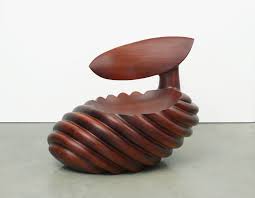 Wendell Castle (born November 6, 1932 in Emporia, Kansas, USA) is an American furniture artist and a leading figure in American craft.

His work has an organic fluidity not often associated with everyday furniture.

Father of the art furniture movement, Wendell Castle has been a sculptor, designer, and educator for more than four decades. An influential artist, his work has led to the development of handcrafted, modern designer furniture as a major art form and his name is revered above all others in the field.
His bold and graceful pieces, often organic, and sometimes whimsical, are crafted from rare and beautiful hardwoods, plastics, veneers, and metals in a timeless contemporary style. His expression of color and exotic materials are synonymous with the Wendell Castle name.

In 1958, he received a Bachelor of Fine Arts in industrial design, and in 1961, he received a Master of Fine Arts, both from the University of Kansas. From 1962-1969, he taught at Rochester Institute of Technology, School for American Craftsmen, in Rochester, NY, and is now an Artist in Residence.[1] In 1980, he opened the Wendell Castle School in Scottsville, NY. He has garnered a number of awards, including a 1994 'Visionaries of the American Craft Movement' award sponsored by the American Craft Museum, a 1997 Gold Medal from the American Craft Council and a 1998 Artist of the Year Award from the Arts & Cultural Council for Greater Rochester.[2] He has also received grants from the National Endowment for the Arts and the Comfort Tiffany Foundation. In 2001 he received the Award of Distinction from The Furniture Society.