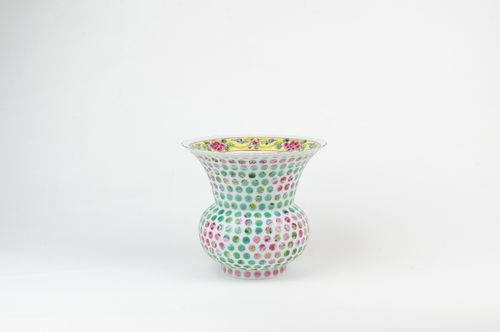 Hans Tan has used a batik-inspired technique to transform the traditional decoration of his ceramics' surface and carefully sandblasts the unmasked portion, revealing the delicate white porcelain below. The process highlights fragments of color from the original surface. The Spotted Nyonya series employs a pattern of dots.

Hans Tan is a designer and an educator based in Singapore. His work is occupied with the authenticity of the contemporary design artifact being a deliberate gesticulation of material culture. Working across objects and installations, he deploys design as medium, making use of utility as a pretext to explore ideas concerning heritage and consumption, at the same time drawing on notions pertaining to the materiality of one’s imagination.

In 2009, Hans was nominated for the Design Miami Designers of the Future Award and was spotted by Designnet magazine Korea as one of 36 Young Asian Designers. He was a winner of the Martell Rising Personalities Award 2009, which honours individuals from different creative fields who are passionately driven to push beyond the boundaries of success. His works have been shown in exhibitions such as “Singletown” at the Venice Biennale, “Surface art/design” in Dortmund and Cologne, and “No Boundaries” at ArtStage Singapore. His work, Spotted Nyonya, was awarded with the distinction of “Les Découvertes” (best innovative product) at the the fall edition of Maison et Objet 2012 in Paris, and most recently been conferred Design of the Year at the President’s Design Award 2012, Singapore’s most prestigious design accolade. In 2013, he was named as one of Perspective’s 40 under 40, an award that recognizes design talent from the Asia- Pacific region.

Hans has also actively engaged in curatorial work, and has produced several exhibitions with a keen interest in local design culture. His penchant for design pedagogy is guided by the concept of deformative inquiry, developing imaginative thinking tools that provide novel approaches to the design process based on generative deformations, use of language and systematic reflection. He is an assistant professor at the Division of Industrial Design, National University of Singapore.