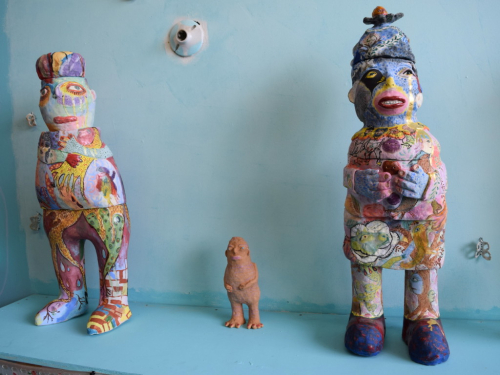 Lulu Yee is a ceramic artist who has created a colorful, imaginative and almost mystical world of fantastic and playful creatures. No two are alike but all embody a colorful and creative verve.

As Benjamin Sutton writes for the Bushwick Open studio event, "Lulu Yee's studio at 1717 Troutman, in the Bushwick neighborhood of Brooklyn, New York, its walls painted bold colors and every available surface inhabited by her sweet, strange, and ornate ceramic sculptures of crowns and humanoid figures, felt like an enticing test run for a much more ambitious and elaborate installation. I sincerely hope a gallery gives her a chance to create a total environment for her intricately painted ceramic objects." 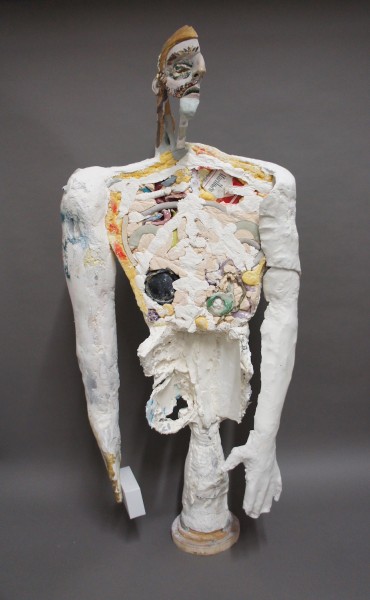 Derek Weisberg creates works which are emotional and psychological self-portraits. "Through my art I aim to make sense of my life, my experiences, and the times I live. I do not wish to represent like a photo, instead achieve a guttural, visceral, heartfelt sensibilities. Accessibility is key as I attempt to express basic human qualities, which are universal and timeless. At its core my work reflect humanist ideology; searching for truth and universal morality based on the commonality of the human condition. Much of my work focuses on conditions of longing, loss, dysfunction, fragility, vulnerability and melancholy. In 2006, when my mother passed away I began to include themes of death, afterlife, spirituality and the metaphysical. A traditional Jewish concept and practice, which I exercise through my work, is that “The voyage of the soul is dependent upon the actions of the ones who are living”. Themes of death are explored through expressing life. To experience death is to experience the most unique situation in life; it is simultaneously completely familiar and alien, definitive and confusing, guaranteed and mysterious. My work is a combination and slow digestion of all these dualities and subtleties."

He was born in 1983 and began sculpting at a very early age starting with the medium of mashed potatoes as soon as he could hold a fork and knife, moving onto action figure assemblage when he could load a hot glue gun, and at age 7 he transitioned into the medium of ceramics, which was the beginning of his lifelong love and ultimate passion. He unwaveringly pursued ceramics sculpture throughout his childhood and teens, in Benicia, CA, where he was raised. At age 18 he moved to Oakland, CA, to pursue his love for ceramics and art in general and attended California College of Arts and Crafts. At CCAC he received several awards and graduated with high honors in 2005 with a BFA. Since then Weisberg has co-owned his own gallery, Boontling Gallery, as well as curated numerous other shows. He has also worked with highly esteemed artists such as Stephen De Staebler, Ursula von Rydingsvard, Manuel Neri, and many others. In addition Weisberg has maintained a strong and demanding studio practice, exhibiting regionally, nationally, and internationally. Weisberg has participated in over 90 shows in the last 8 years, and there are no signs of slowing down in the future. Weisberg currently lives and works in NY and is faculty at Greenwich House Pottery.

Heidi Elbers gets close to her subject. Her work is both intimate and open with subjects often staring back at the viewer.It is both representational and intuitively abstract. Just what is the subject thinking?

She writes: My work addresses the balance between grace and awkwardness, strength and vulnerability, deception and honesty. Growing up in New Orleans, I developed a strong nostalgia for extravagant costumes and a culture that puts emphasis on physical beauty. As my sweet southern grandma would say, “You can't possibly feel bad when you look so pretty.”  After an accident in 2011, I had a difficult time embracing reality and truth in my work. I transformed or concealed ailments and imperfections into something beautiful. The decorative outfits define the girls in my works and cover up any `flaws’ both physical and implied. 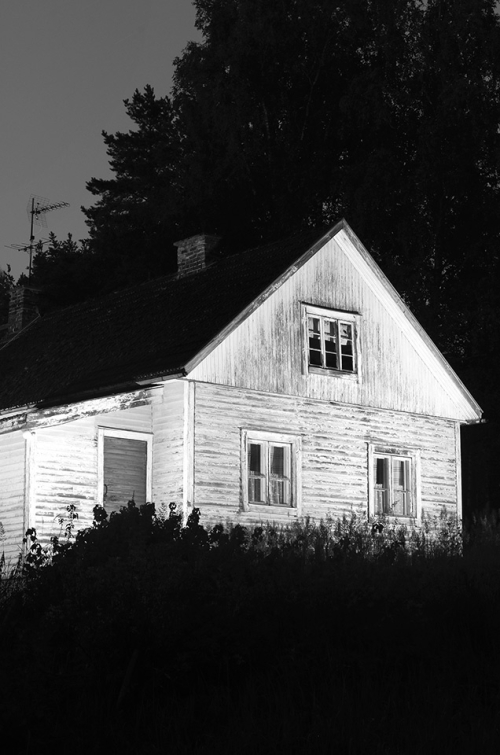 Laura Lappi works in a wide range of media including installation, sculpture, photography and video. Her work crosses the boundaries between our perception of space and time and between reality and fiction. She is interested in creating bewilderment, uncertainty, unexpected situations and mystery by shifting the form of space and the viewer’s point of view. Emotions such as loneliness and yearning are important concepts within her work.

Lappi's work has been exhibited widely in solo and group shows in Europe, US and Asia including AC Institute in New York, Galleri Vest in Reykjavik, Galleri Uusi Kipinä in Lahti, Gallery Titanik in Turku, Kunstpodium T in Tilburg, Gramercy Gallery in New York, Fotogalerie in Rotterdam, Re:Rotterdam International Art Fair in Rotterdam, Twente Biennale 2013 in Enschede, Supermarket Art Fair in Stockholm, Access Art in New York and Green Papaya Art Projects in Manila. She has received grants from the Finnish Cultural Foundation, FRAME (Finnish Fund for Art Exchange) and the Arts Council of Finland.