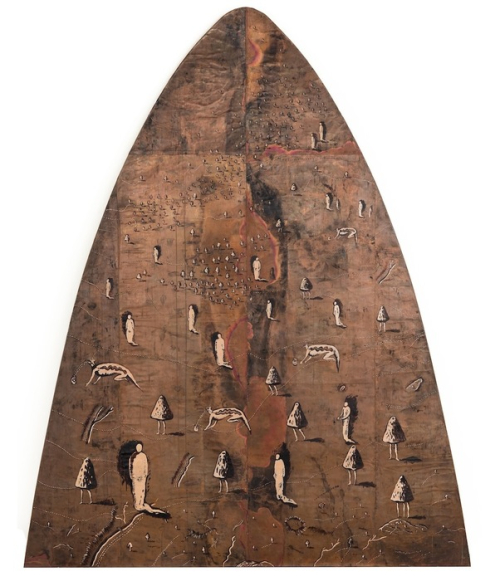 İnci Eviner is a gatherer: she collects the memory of crowds, unearths folk narratives, and retells their stories in her own language. She is a hunter: she traces misogyny, detects hierarchy, and targets it with the tools of a unique feminist visual lexicon. Although she doesn’t specifically identify her work as feminist, Eviner dissolves dichotomies and prescribed identities using the female body—but just as often, ungendered bodies—as an agent through which womanhood, gender, and the politics of identity are performed.

To understand Eviner’s art, which spans nearly every conceivable medium, one needs to break the mindset of a western linear understanding. The tales in her works mushroom in different terrains, hatching into a rhizome. As in Deleuze and Guattari’s model of the rhizome, which opposes a hierarchical, tree-like model of culture and thought, Eviner’s work rejects a continuous, unbroken, orthodox perception of the world. Unlike the tree that sprouts from a single seed, branching out from a stable trunk, the rhizome is a root-like organism that spreads and grows horizontally, making diverse, but not necessarily continuous connections and appearances.