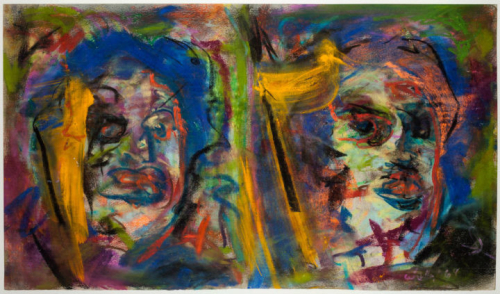 In the more than fifty years since Jack Whitten’s work was first included in a four-person show at Allan Stone in 1965, the year after he graduated from Cooper Union, he has proven impossible to characterize. While this is very much to Whitten’s credit, I also think that the radical stylistic and material transformations his work has undergone partly contributed to why — for many decades — he remained an underappreciated artist. Another reason was because he began exhibiting his unaffiliated paintings in the 1960s, when painting was considered dead or dying, and critics and institutions began championing artists who didn’t paint. Adding to this neglect is the fact that it is easy to miss the achievements of a black abstract painter if you are a white critic busy celebrating Conceptual Art. Because of a variety of so-called color-blind prejudices such as these, the art world did not begin to seriously deal with Whitten’s merger of formal inventiveness and emotional content until the past decade, when he entered his seventies. And, if you ask me, he still hasn’t gotten the attention he deserves.

The Sixties in America, in contrast to the optimism of the immediate postwar era, was frightening for everyone, full of fear, death, anger, resistance, and mourning — a daily consciousness of terror that never quite abated. During that time many of the most celebrated artists were the ones who were disengaged from this reality. They were content to fill the white box with their historically important works. This was the dilemma that Whitten, who was born in 1939 in Bessemer, Alabama, deep in the heart of the legally segregated South, faced. In an interview with Robert Storr that appeared in the Brooklyn Rail (September 2007), this is how he talked about the Sixties:

At that time, I was doing the best I could to contain the kind of imagery I was seeing. It wasn’t an intellectual situation, but rather, it was an emotional necessity. As a matter of fact, they’re my autobiographical paintings. I mean, I was going through a serious crisis in my life. But then everybody was. The whole race issue forced me to pick myself apart subconsciously until I met people like LeRoi Jones, Romare Bearden, and Jacob Lawrence who had found other solutions for their creative lives.