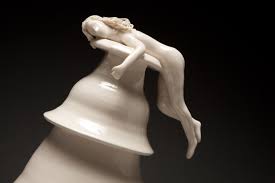 For over fifty years, Coille Hooven has been working in porcelain and creating psychologically charged sculpture that explores domestic-centered narratives from the kitchen to the bedroom. One of the first ceramists to bring feminist content to clay, Hooven uses porcelain to honor the history of women’s work, confront gendered inequality, and depict the pleasures, fears, and failures of partnering and parenting.

Hooven’s sculptures range from teapots and vessels to figurative busts and dioramas, and they mine the domestic psyche to produce vignettes that resonate with familiarity despite an undisguised use of the fantastical. Developing her own vocabulary of archetypes, she regularly revisits certain creatures and forms: a domestic palette of aprons, pillows, shoes, and pies, as well as a cast of characters that includes mermaids, fish, snakes, and anthropomorphic beasts that appear part-dog, part-horse, and part-human. While these creatures may appear familiar and amiable at first, tension lurks underneath. Recalling fairy tales, fables, and myths, Hooven’s sculptures conjure a vision of the unconscious—both the joy and buoyancy of dreams, as well as the discomfort and despair of anxiety and doubt.

At a recent exhibition at NYC's Museum of Design, Coille Hooven: Tell It By Heart assembles more than thirty years of Hooven’s work. Hooven studied with David Shaner at the University of Illinois at Urbana-Champaign, and later relocated to Berkeley, California, with her two children. Citing Peter Voulkos and Robert Arneson as influential in her decision to move west, Hooven became part of the Bay Area clay community, where she worked independently from academia and forged a career making both functional pottery and ceramic sculpture. In 1979 she became only the second woman to be in residence at the Kohler Co.’s plant in Kohler, Wisconsin, as part of their renowned Arts/Industry residency program. Coille Hooven: Tell It By Heart is curated by Shannon R. Stratton, William and Mildred Lasdon Chief Curator, with the support of Curatorial Assistant and Project Manager Angelik Vizcarrondo-Laboy.