Perhaps even more exciting than the opening of the anxiously anticipated extension of the Q subway line along 2nd Avenue in Manhattan was the mosaic art in each new station. Many NYC subway stations have some mosaics but these new stations bring it to a new artistic level with artwork by Sarah Sze, Chuck Close and Vik Muniz all translated into large mosaics.

So will this push the art of mosaics into greater acceptance in the established art world?  Mosaics as with ceramics, has long been relegated to crafts rather than fine art. But this may be changing. Established ceramicists, such as Betty Woodman, have had solo shows at the Metropolitan Museum of Art. Emerging ceramicists like Lulu Yee have been the toast of Bushwick Open Studios. So as go ceramics, so go mosaics?

Mosaics should mean more than just a jigsaw puzzle of pieces that form an image. Great mosaic art should expand the range of the medium. Here is a list of the top five ground-breaking mosaic artists working today: 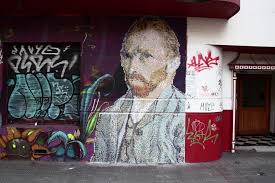 Pixel, is a Santiago street artist whose mosaic work pixelates cultural heroes such as Nicanor Parra, artists such as Van Gogh, and iconic artwork like from Roy Lichtenstein. Pixel brings his mosaics to the streets where his work blends with other forms of street art for people to enjoy on the streets of Santiago. According to MosaicArtNow, Pixel explains the relationship of his art with the public. He says, “At first, people think they are facing a painting. Approaching and touching, they realize they are in fact facing a mosaic. Then, they wonder if it was really hand made.  They also play with distance to appreciate the work in detail, take photos, and when the image is revealed perfect and detailed on the small screens of their smartphones, they fall for it!”

Using a range of different materials, King’s mosaics are complex compilations that, as her website states, stimulate the imagination. Some of her work is described as coded messages. She asserts, “These mosaics explore the dynamic tension created when familiar organic shapes can be seen as both macro and micro visions of our landscape. Shapes that are simultaneously at rest and moving, pulling the tesserae together into a complex composition while exploring the interaction of each element and the mystery of the spaces between.” 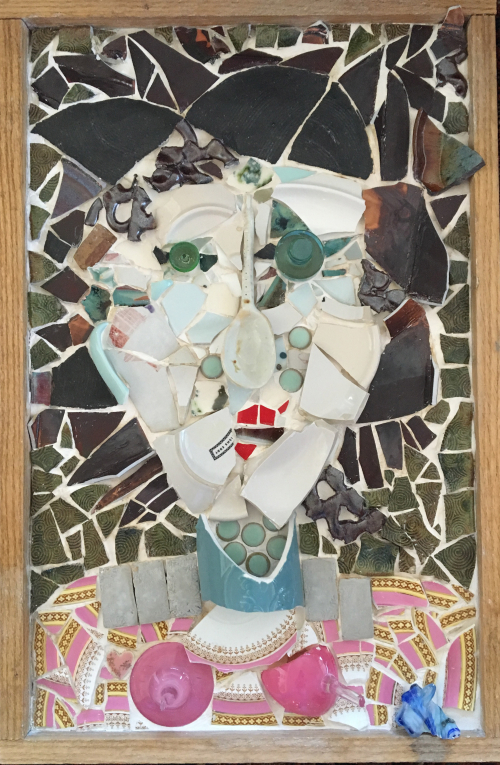 Weisler describes herself as an urban artist with an interest in decaying and discarded objects. First starting in photography, Weisler was captivated by decaying, peeling and eroding street art. From there, she gravitated to collecting and assembling discarded and broken objects to not only capture their inherent beauty and mystery but also to create new mosaic images. She explains, “My mosaics are often unplanned and are created organically as the pieces come together to tell their story. A broken mug, a piece of shattered plate or a discarded misshapen object are all important elements in my work.” 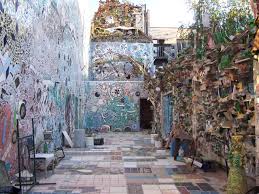 Isaiah Zagar might be best known for one of his greatest achievements – The Magic Garden in Philadelphia, which is essentially a full house and side yard of compiled mosaic art.  As described by Lonely Planet, “Think of all the things you have thrown away this week – an old shoe, a broken mirror, a loose button, an empty bottle of wine. Then picture all of it broken apart, artfully cobbled together with quirky objects like antique tiles and hand-carved Mexican dolls, and applied to a wall with cement, clay, paint and glue to form a gloriously colorful mural. This is the work of septuagenarian Philadelphia-born Isaiah Zagar: mosaic artist, world traveler, visionary, dumpster diver.” 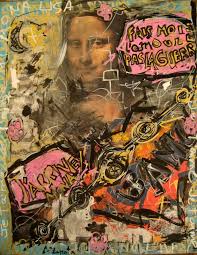 Better known as a painter, Zapata had a chance encounter when he walked into Koko Mosaico in Ravenna, Italy.  It was there that he saw the potential of mosaics to translate his paintings into formative artwork. “With these pieces, I wanted to create great contrast and pay tribute to the history of art.  I find taking a painting done in graffiti and recreating it using these ancient techniques helps me to understand the contemporary moment. These works represent to me where we have been and where we are going – they derive their strength from this duality,” he states on MosaicArtNow.