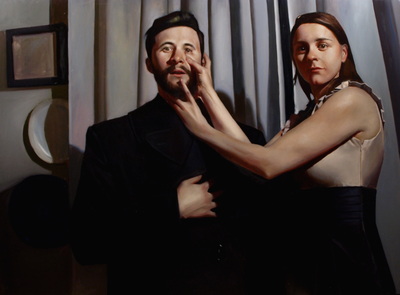 As described by Bryce Grates, E. Thurston Belmer is an independent artist currently based in New York who is best known for his strikingly dark oil portraits and prints. With a Masters from Washington University in St. Louis and a BFA from Lyme Academy College of Fine Art, Belmer is well equipped for success and hitting the gound running this year, with already participating in three shows.

Belmar’s portraits have an intriguingly dark twist to them, unlike any traditional portrait. Often including surrealism, nudity, pained facial expressions and lots of contrast, the oil paintings are aesthetically interesting in an unconventional way that one doesn’t traditionally experience in a portrait. The paintings evoke emotions from the viewer that pry them to consider the life of the subject, and question their identity and place in society. The portraits also have dark titles that lend themselves to the pieces, such as “You may cut down my branches and build a house. Then you will be happy.”, which depicts a nearly-nude female body seemingly “floating” about a half-visible male body that is curled up on the flood below her, and “I am. I am. I am.”, which shows a woman alone, slouched on the ground of a hallway.

Belmar lives and works in Brooklyn, New York and has shown his work nationally.