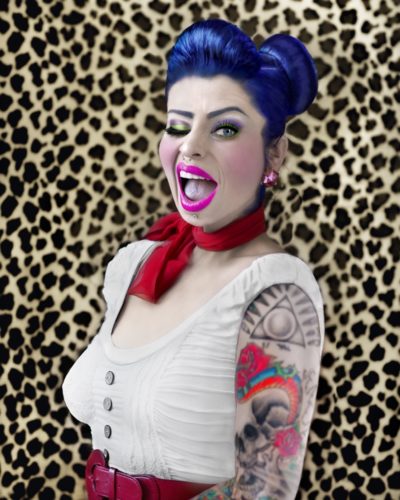 oses in a series of humorous and processed self-portraits, which shows us different contemporary mothers in current modern families. Current statistics confirm that the diversity of family structures are affected by many situations including the rise in divorce rate, interracial unions and legalization of same sex marriages. These statistics support the change in the mother prototype.

By taking humorous and dynamic self-portraits, Rocio explores what mothers should look like in the progression of the “modern family”. Statistically, the diversity of modern family structures is caused by divorce. She uses these facts and her own experiences as a base to her concerns and questions.

De Alba’s ongoing series, “Honor Thy Mother,” is featured in the Atelier Gallery at the Griffin Museum of Photography from June 6st through September 3rd, 2017. An opening reception will take place on July 13th, 2017 from 7-8:30PM. Event is free and open to the public.

Rocio de Alba shares, “In my early twenties my pious old fashion Hispanic parents divorced. Years later they confessed their most devoted accomplishments were sparing us the un-pleasantries associated with step-parents. Yet almost immediately my mother began a relationship with a man… and my father courted many women. Baffled, I witnessed my strict marital ethics unravel through the adults that enforced them and seamlessly integrated into what is referred to as the “modern family”.” In these self-portraits, de Alba uses props and minor Photoshop edits to transform herself into these numerous characters which “[focus] on the gamut of the contemporary mother archetype. Rocio herself has undergone broken relationships and separated children. She says, “As the evolution of a progressive family dynamic ensued, it revolutionized societal doctrines that enforced what mothers should look like and instead made mothers reinvent themselves unconventionally and with disregard to social biases.”

Rocio de Alba is a fine art, multimedia and conceptual photographer based in Queens, New York. She received her BFA from The School of Visual Arts and is an award winning book designer and handmade book instructor. Her work has been featured on many platforms including CNN Photos, New York Magazine, and the New York Times Lens. Her work has been part of different group exhibitions including at The Center for Fine Art Photography in Colorado, Blue Sky Gallery in Oregon, and at the Vermont Center of Photography. Her handmade book has earned a finalist position and was displayed at the Festival Documental in Barcelona. On April 2017, the book was also selected for the INFOCUS Exhibition of Self-Published Photo Books at the Phoenix Art Museum.