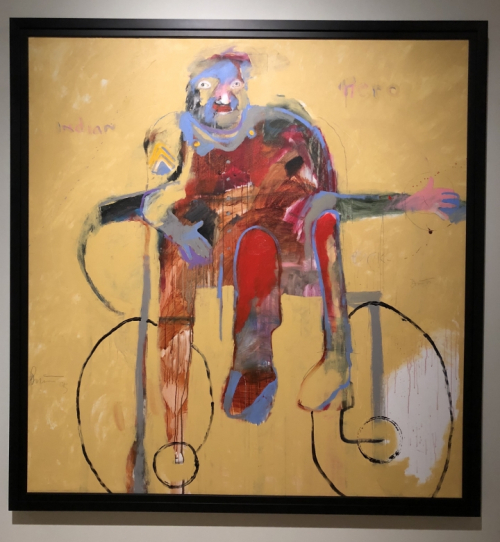 In 2013, artist Rick Bartow suffered a major stroke. Within days of nearly losing his memory and motor skills, he was back in the studio, drawing and painting his way back to health. Until his death, just three years later, Bartow continued to produce artworks drawn from his personal history, Native American ancestry, and friendships with artists and indigenous peoples from around the world.

“ABC 123,” a self-portrait made shortly after Bartow recovered from his stroke, documents his experience of losing and recovering his memories. Letters and numbers serve as mnemonic devices, repeated alongside the artist’s handprints. Bartow’s face, identifiable by his wire-frame glasses, is frozen in terror as he confronts the possibility of losing recollection of the past. A graphite drawing from 1979, the exhibition’s namesake, echoes this later portrait by featuring another figure whose face is a rictus of terror. This work reflects on Bartow’s earlier life, specifically the despair following his military service in the Vietnam War.

By all accounts, Rick Bartow was an unwilling combatant, working as a teletype operator and hospital musician in Vietnam from 1969 to 1971. He was awarded a Bronze Star for his time abroad, but suffered from PTSD and substance abuse upon returning to the US. While his artworks avoid representing specific wartime experiences, graphite drawings from the artist’s early career express raw emotion, translating ineffable feelings of despair into visceral portraits of physical and psychological horror.

Nearly losing his memories might have encouraged Bartow to confront parts of his history he did not embrace during most of his life. A year before his death, he painted “Buck,” a portrait of himself as a veteran, with a striped badge on his right arm to indicate rank and a wheelchair for his ailing health. In faint letters, “Indian” and “Hero” flank Bartow in mock salute. The self-portrait is one of few examples of the artist acknowledging his status as a veteran and physical vulnerabilities as an older adult.