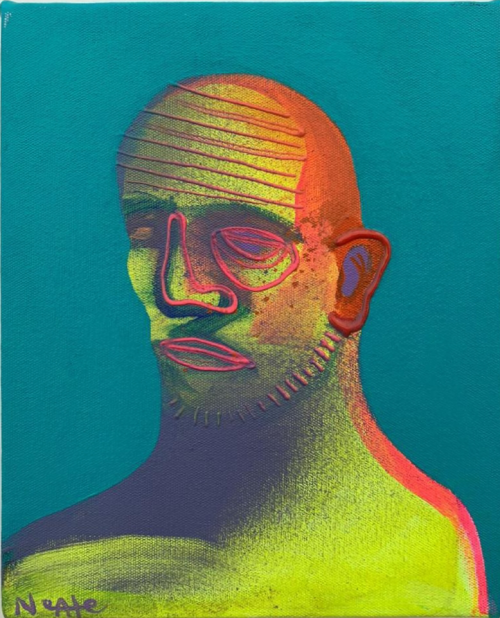 Adam Neate's art career started in the early 2000s painting as a graffiti artist. He went on to a term he calls free art, where he would paint on found pieces of cardboard and leave them around the streets of London for people to find and take home. Over the years he left thousands of individually painted works and was one of the early pioneers of the movement that is now called Street Art. In 2006 he was given the opportunity to show his paintings in a more traditional gallery setting at Elms Lesters, showing alongside established names like Futura and Phil Frost. Since then he has been featured in prominent solo and group exhibitions worldwide to great critical acclaim.

Adam Neate (born 1977) is a British painter, conceptual artist and described by The Telegraph in 2008 as "one of the world's best-known street artists". He specialised in painting urban art on recycled cardboard, and has left thousands of works in the street for anyone to collect. He is a contributor from the movement in transferring street art into galleries. Neate's street art has garnered global interest, having been documented on CNN reports and European television. Major collectors and celebrities are fighting for his original works and international critics have lauded the artist's work. Since 2011 Neate has been mastering his own language of 'Dimensional Painting'. Elms Lesters publish a range of Adam Neate's Dimensional Editions and Multiples