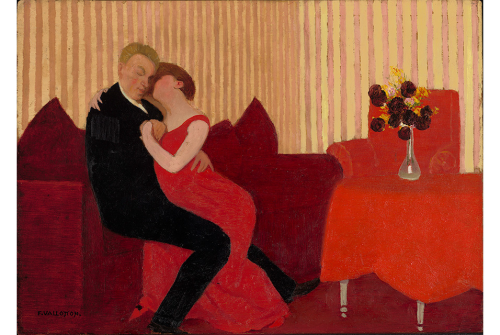 According to the New York Times, Swiss painter and printmaker Félix Vallotton was an intriguing, talented but slippery artist. You often don’t quite know what to expect next in terms of style or subject, even within the same year.

Vallotton, who wrote criticism for a newspaper in Lausanne, Switzerland (where he was born in 1865), gave Rousseau an early laudatory review.

Although Vallotton ignored most of modernism, he influenced such surrealists as Dalí and Magritte, and also the Neue Sachlichkeit (new realism) painters of Weimar Germany.

In addition to painting, Vallotton created a series of groundbreaking woodblock prints in the 1890s, which made him famous, provided entry into the Parisian avant-garde and made his place in modernist art history. Their daring black and white compositions depict some of the pleasures, but more often skewer the hypocrisies and inequities of Parisian life. Vallotton did not see life as full of happy endings.

He made his first woodblock prints in 1891, inspired by the innovations of Japanese artists, eliminating their rich colors while exploiting their practice of cutting with rather than against the grain. It facilitated the curving shapes and lines basic to his formal wit.

Within a year Vallotton had a thriving, if not highly remunerative career. His terse exercises in dark and light appeared in periodicals, illustrated books and portfolios in Paris, then London and as far as Chicago. They were nearly instantly understood as radical, and by the mid-90s Vallotton was a regular illustrator for Le Cri de Paris, a left-wing magazine and the like-minded journal La Revue Blanche, which also covered culture (and was founded by Alexandre and Thadée Natanson). The woodblocks have the compression and legibility of cartoons and news photos, the formal daring of abstract art and the literary punch of modern short stories.