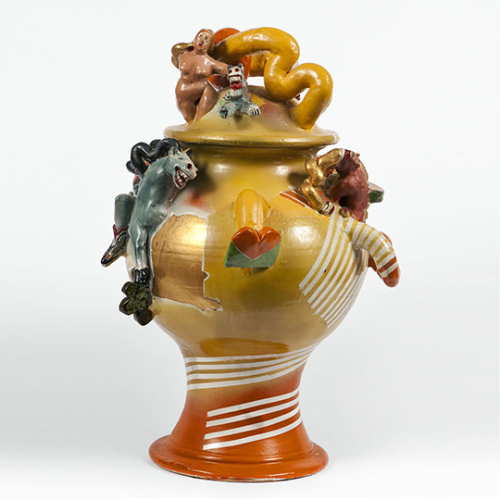 Over the course of her five-decade career, Viola Frey produced an impressive body of artwork, including ceramic sculpture, bronze sculpture, paintings, and drawings, and explored the mediums of glass, wallpaper, and photography. Internationally respected—with works held in over seventy public collections—Frey was drawn to the expressive potential of clay and, along with her colleagues Robert Arneson and Peter Voulkos, instrumental in cracking the barrier between craft and fine art.

Born in 1933 and raised on her family's vineyard in Lodi, California, Frey felt compelled to create and exhibit artwork at an early age. When she was eleven, she submitted a rendition of a Matisse drawing for exhibition at the Sacramento Public Library and was excited when it was accepted. However, as she later reflected in her 1995 interview for the Archives of American Art, even at the age of eleven, she realized "the point was not to draw like Matisse but to draw like yourself."

After graduating high school in 1951, Frey took classes at Stockton College (now San Joaquin Delta College) before receiving a scholarship to attend the California College of Arts and Crafts (now California College of the Arts) in Oakland. She completed her BFA in 1955 and then traveled to New Orleans to pursue an MFA at Tulane University. While there, she studied under George Rickey, Katherine Choy, and visiting artist Mark Rothko. In 1957, before finishing her graduate degree, Frey moved to New York, where Choy had recently founded the Clay Art Center in Port Chester and was actively engaged with the advancement of ceramic arts. To support herself, Frey commuted into Manhattan daily and worked in the business office of the Museum of Modern Art.

By 1960 Frey had returned to San Francisco, where figurative art and working with clay were in the vanguard. During this period, she produced functional pottery, wall plates, and ceramic sculpture, in addition to continuing a rigorous painting and drawing practice that focused on still-life, landscape, and figural compositions.

Office work helped to support Frey's artistic ambitions. She worked in Macy's accounting department from 1960–70 and during this period also began her teaching career. In 1964 she was hired at CCAC, at first as an Artist Potter in Residence and later teaching a color and light class in the Painting Department. When reflecting on her early teaching years, she mentioned particularly enjoying the freedom to work in all mediums. Frey felt that "the only way to establish oneself as an artist was to show that as an artist [she] was multifaceted and that [she] could work in other media. So no one could put [her] in a box." By 1971 she was a full-time assistant professor in the Ceramics Department and had purchased her first home, converting the basement into a studio.

Frey was a passionate collector. Along with fine art, china, and books, she collected figurines and knick-knacks found at flea markets, which served as inspiration for her junk sculptures, later called "bricolages." By curating and producing her own source materials, Frey created a complex personal iconography that would serve as her creative wellspring throughout her artistic career and assist in her exploration of power and gender dynamics.

In 1975 Frey moved from San Francisco to Oakland, where she could expand her studio outside and study how natural light would interact with the commercial glazes that she preferred. As her figures became more colorful and increasingly taller—eventually reaching over 10 feet—her need for space grew. In 1983, as a supplement to the home and garden studio that she owned, she rented a 5,000-square-foot warehouse to accommodate the monumental works that she was building to challenge both the viewer and herself. In 1996 she purchased a 14,000-square-foot warehouse, where she worked until the day of her death July 26, 2004.

Prior to her death, Frey exhibited annually, traveled the world to expand her art practice, received two National Endowment for the Arts fellowships, taught thousands of students, guided the design and building of the Noni Eccles Treadwell Ceramic Arts Center on CCAC's Oakland campus, was honored with an honorary doctorate from CCAC, and co-founded Artists' Legacy Foundation. Learn more about her work and accomplishments at www.violafrey.org.