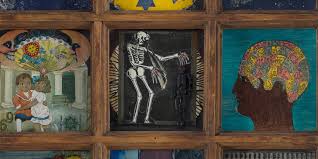 "There has been an apparent thread in my art that weaves from early prints of the 1960's through later collages and assemblages and ties into the current installations. That thread is a curiosity about the mystical. I am intrigued with combining the remnant of memories, fragments of relics and ordinary objects, with the components of technology. It's a way of delving into the past and reaching into the future simultaneously. The art itself becomes the bridge. Curiosity about the unknown has no boundaries. Symbols, images, place and cultures merge. time slips away. The stars, the cards, the mystic vigil may hold the answers. By shifting the point of view an inner spirit is released. Free to create," noted Betye Saar in 1998.

In Betye Saar’s work, time is cyclical. History and experiences, emotion and knowledge travel across time and back again, linking the artist and viewers of her work with generations of people who came before them. This is made explicit in her commitment to certain themes, imagery, and objects, and her continual reinvention of them over decades. “I can no longer separate the work by saying this deals with the occult and this deals with shamanism or this deals with so and so…. It’s all together and it’s just my work,” she said in 1989.1

Saar grew up in Los Angeles and Pasadena, California, and studied design at the University of California, Los Angeles—a career path frequently foisted upon women of color who were interested in the arts, due to the racism and sexism prevalent in universities at the time. Saar eventually studied printmaking, and her earliest works are on paper. Using the soft-ground etching technique, she pressed stamps, stencils, and found materials into her plates to capture their images and textures. Her prints are notably concerned with spirituality, cosmology, and family, as in Anticipation (1961) and Lo, The Mystique City (1965).