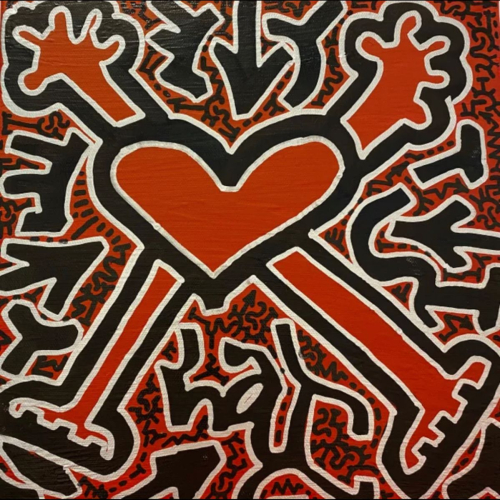 Born and raised in the Lower East Side, Angel Ortiz (also known as LA2), like so many other kids would write on his desks and chairs in school. When his mother put him in the NYC Boys Club, which he loved because of the access to a swimming pool. His friends at the Boys Club were already tagging up in the streets, buses and sanitation trucks when asked him to join them in using the streets as their canvas. After that, Ortiz was tagging non-stop. He became the King of the buses and sanitation trucks. His tags were everywhere, At the age of 14, Ortiz met Keith Haring, an artist from Reading ,PA. Haring was attending The School of Visual Arts and had a studio in the Lower East Side (The Rat Studio). Of all the tags he saw around the city, the "The LA2 tag" stood out to him. He asked around to see if anyone knew whose tag it was and looked for Angel for months before they were finally introduced at Junior High School 22. Here, Haring and other graffiti artists were creating a mural. He asked if anyone knew LA2, to which SOE, Angel's friend responded and said, "I can get him for you." He went to Angel 's house, told him there is a guy with funny shorts and glasses asking for him. When he skeptically went over to the school, Haring could not believe Angel was a kid! They got along right away and loved learning from each other. Ortiz showed Haring some markers tricks- Keith did not know too much about markers, but he was the King with the brushes. It was as if they had always known each other.

Their first collaboration was that first day on a taxi hood in The Rat Studio. LA2 added his tags and crew names and asked Keith if he could add squiggly lines to add energy.  Two weeks later, Haring called Ortiz and told him he had sold the piece and he wanted to collaborate with him.  Tony Shafrazi gave him his first show with their collaborations in the Fluorescent Room.  Keith Haring then asked his mother's permission to take Angel traveling. He wrote a letter to his teacher and at the age of 15 he was exhibiting in Europe. Through Haring, Ortiz met art icons like Andy Warhol, Jean-Michel Basquiat and Richard Hambleton. They exhibited for almost seven years, but continued collaborating till Keith's passing in 1991.

He believes meeting Keith Haring was a blessing for both.  Humbled to this day that it was his tag that caught Keith's eye.